The Wyrms were ancient beings who pulled bugs into their thrall.[1][2] They were larger than Bardoon, though they had fewer limbs. They also had the ability of foresight, meaning that they could predict the future to some extent.[3] One of these Wyrms died in Kingdom's Edge, transforming into the Pale King.[1] A Lore Tablet in the Fungal Wastes remarks on him having prescience as well.[4]

There is a reference to another being called the Blackwyrm in White Defender's journal entry.[5] This creature shares the word "wyrm" in its name; however, it is unclear whether it is related to the Wyrms or not.

At a certain point, all Wyrms died out or were wiped out from Hallownest.[6] 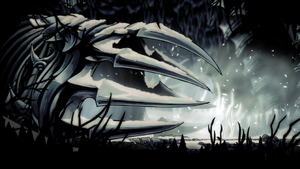 The former body of the Pale King, the Cast-Off Shell similarly has a horned crown. The ash falling in Kingdom's Edge is moult that originates from this decaying corpse.[7] At the very end of the Cast-Off Shell, the King's Brand can be acquired by the Knight, marking them as King.