The Watcher Knights are a single main boss in Hollow Knight. They guard Lurien the Watcher, one of the three Dreamers. Their Journal entry is unlocked at the end of the fight, regardless of how many there were.

The Watcher Knights used to defend the entrance to the Watcher's Spire and Lurien's dormant body.[1][2] They eventually died while standing guard, leaving their shells behind.[3]

When the Knight tries to reach the end of the Watcher Knights' room, the gates close by themselves. The swarm of infected flies hovering above them then start entering the husks one after another. In doing so, they reanimate the Watcher Knights to defend Lurien's seal.[3] Upon defeating each Knight, the flies within it escape the room and its husk splits apart. The fight is over once all six Knights in the first row have been defeated.

Additionally, the husk second from the left can be broken before the start of the fight by bringing a chandelier down on it. Its support can be severed from a hidden space behind a breakable wall. This reduces the number of Watcher Knights to be fought to five.

The Watcher Knights have three attacks and two manoeuvres: 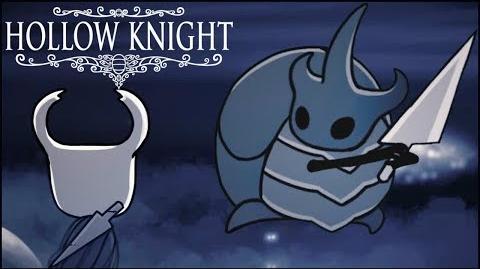 There are 6 Watcher Knights total, and the fight starts with only one Knight being reanimated. Once the Knight has been active for 20 seconds (just when the music gets louder) without being defeated, a second Knight is reanimated, joining the first. However, if the first Knight is killed quickly, two of the next Knights are reanimated together. Note that no more than two Knights can be active at once.

Since the Watcher Knights attack in groups, it is best to not get cornered by them. To prevent this, jump above them and hit them from the air, as their spinning jump is their only counter to aerial attacks.

Since they have fast attacks, the Quick Focus Charm is highly recommended for this fight. Another tactic is using Lifeblood Heart for a health boost, and Stalwart Shell to increase invincibility time, then damage the Knights while tanking their attacks. Using Sharp Shadow while having the Shade Cloak can make this fight easier as the Knight can dash through them dealing 1x Nail damage even when they are rolling; equipping Dashmaster as well increases the damage. Dream Wielder is also useful, as it allows the Knight to collect lots of SOUL from the Watcher Knights as they roar, because, while they are immune to damage during this state, they are not immune to being struck by the Dream Nail.

Another way to easily take them down is with Shaman Stone and Descending Dark. Three uses of Descending Dark with the damage boost is enough to kill a single Watcher Knight, and the invincibility frames keep the Knight safe long enough to jump and down-strike with the Nail before using another Descending Dark. When attempting this method, Spell Twister and Dream Wielder are very helpful to have equipped as well, in order to maintain high amounts of SOUL and lessen the number of times the Knight needs to hit the Watcher Knights with the Nail.

Directly to the left of the arena is a breakable ceiling (accessible via Mantis Claw), which reveals a secret area containing the anchoring of a chandelier. Striking it with the Nail drops the chandelier, crushing one of the corpses below and permanently reducing the number of reanimated Knights from 6 to 5.

The Watcher Knights are located near the top of Watcher's Spire.

Infected flies filling the shell of a Watcher Knight 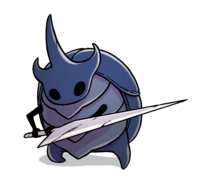