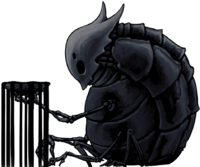 Void is a substance that is generally found in the Abyss. It plays a major role in Hallownest's history and in current events.

Void inherently opposes light and is often referred to as darkness and shadow.[1][2][3][4] It also opposes Higher Beings like the Radiance and the Pale King who are both described as a light.[5][6]

Void has a certain potential when it is unified.[7] When not unified, the Void attacks anything indiscriminately.[8] Yet in this state, the Void can still be suppressed by light sources such as a lighthouse filled with lumaflies.

Once the Void is united under one will, it no longer attacks aimlessly and can instead challenge and defeat the source of the Infection.[9][10]

Void exists primarily in two states, as a liquid and as a substance given form.[11][12] The largest amount of liquid Void is the sea of Void at the bottom of the Abyss. When the Void is not unified and when light does not shine upon the liquid in the Abyss, it lashes out with sharp tendrils towards intruders.[13][8] If the Void is unified or light is shone upon the liquid, it remains perfectly still.[11]

As a substance given form, Void mainly exists in specific life forms. These can be beings that consist entirely out of Void, such as the Collector, Shades, and the Void Entity.[14][15] Void can also take a form within the shell or armour of life forms, which is the case for the Vessels, the Kingsmoulds, and the Wingmoulds, who have an exterior filled with Void.[16][17][18]

Outside of life forms, Void can take the shape of a Shade Gate, which is a barrier that consists of Void.

Void has an effect on living beings and on certain objects. The sea of Void called to the lighthouse keeper in the Abyss to turn off the light.[19] It also appears to have killed various bugs found throughout Ancient Basin and the bug which holds the Love Key in the Queen's Gardens, who all have Void leaking from their eyes.

The Soul Totem upon which the Sharp Shadow Charm is found seems to have been corrupted by Void. It has Void tendrils attached to it, and the totem itself has become darker in colour. The egg found in the Birthplace area in the Abyss similarly has Void tendrils connected to it.

The Radiance is the ancient enemy of the Void.[21] It is not known whether there was an actual conflict between the two or during which time they became enemies.

Arrival of the Pale King

Sometime after the Pale King arrived in Hallownest, he discovered the Void in the Abyss. He built a lighthouse on top of a natural spire near the sea of Void which was used to suppress the Void.[22][23] The Pale King took Void from the sea and used it in his workshop in the White Palace to create constructs that have Void within them, the Kingsmoulds and Wingmoulds.[3][17][18]

When the Infection first appeared in the kingdom, the Pale King turned to the Void to seal away the Radiance, who was the source of the Infection.[24][3] He and the White Lady had countless children together who were born in the Abyss, which turned them into beings who have Void inside their natural shell.[25][26][27][28]

After remembering their past and accepting the Void inside themself, the Knight obtains Void Heart.[31][32] Void Heart allows them to unite the Void under their will.[33] The Knight is then also referred to as "Lord of Shades".[34] Void Heart causes the Void Tendrils and the Siblings in the Abyss to become passive, as well as the Knight's own Shade.

In the Dream No More ending, the Knight pulls the Void and the Siblings into the fight with the Radiance. At the end of the fight, tendrils of Void grab the Radiance, after which the Shade of the Hollow Knight opens a weak spot on the Radiance's face.

The Knight then breaks their shell and attacks the Radiance in their Shade form. The Radiance is subsequently pulled into the Void and consumed by it.[35] Finally, the Shades in the Abyss are seen going back inside the ground.

In Godhome, Void Heart is required to enter the Pantheon of Hallownest. Inside this Pantheon, the Knight pulls the Void into the fight with the Absolute Radiance, similar to how it plays out with the regular Radiance. However, the Siblings are nowhere to be seen during the fight.

At the end of the fight, the Knight turns into the Void Entity. This being grabs the Absolute Radiance and completely destroys her, making her explode into Essence. Void is shown streaming downwards into the area where Godseeker was observing the fight. The Void Entity moves towards Godseeker and wraps tendrils around her.

The following is a list of Void beings who have a shell or armour and Void within that.

The following is a list of Void beings who have no shell or armour.