Gods And Glory (Part B)

Uumuu is a main boss in Hollow Knight. It guards Monomon the Teacher, one of the Dreamers.

Uumuu is an intelligent yet Infected being similar to the Uomas and Oomas infesting Fog Canyon.[1] It defends Monomon's chamber at the heart of the Teacher's Archives.[1]

Uumuu appears from the acid pool in the room preceding the inner chamber once the Knight reaches it. During the fight, Quirrel intervenes to strike Uumuu with his nail and break its gelatinous defence, exposing its core. Once defeated, the Infection bursts out of Uumuu before it explodes.

When fought in Godhome, Quirrel is not present. Instead, Uumuu summons Oomas to help it, but they can also be used to break its defence.

Uumuu floats around the room and uses one of two attacks: 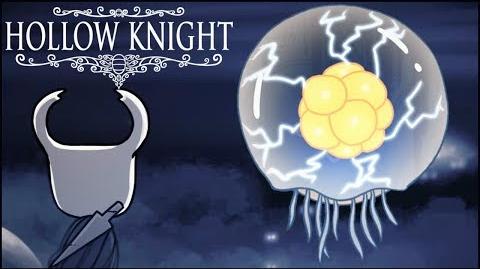 When initiating the fight, Uumuu can deal damage when it rises up from its resting spot within the acid.

Uumuu cannot be harmed normally, as its vulnerable core is protected by a membrane that deflects the Knight's attacks and shields it from Spells. However, after dodging attacks for a short time Quirrel appears to help the Knight, leaping around the battlefield and occasionally popping Uumuu's shield. This deflates Uumuu, leaving it open to attacks for about 5 seconds.

Although Uumuu only has two attacks, they are both quite hard to dodge, and leave few opportunities for healing. In addition, Uumuu's erratic movements and the very sparse opportunities for hitting it compared to its health pool result in a very drawn-out battle.

Get in as many hits as possible when Uumuu's shield is popped, and be prepared to dodge an attack right after. In desperate times, this can be an opportunity to heal instead. Avoid jumping in the acid below, as this greatly slows movement and causes damage if Isma's Tear has not been obtained.

As with most boss fights, the Quick Focus Charm is highly recommended. SOUL-generating Charms like Soul Catcher, Soul Eater, Kingsoul, and Grubsong are also very helpful in this fight, as chances to hit Uumuu, and consequently, chances to gather the SOUL needed for healing, are quite rare. The Great Slash Nail Art and the Pure Nail are recommended in order to make short work of Uumuu.

Uumuu can be completely killed by using the Abyss Shriek Spell three times with the Shaman Stone Charm, allowing it to be beaten in one cycle, given that enough SOUL has been gathered before the fight.

Using the Dream Nail on Uumuu is a good way to gain large amounts of SOUL, but it can be difficult to avoid getting damaged. Equipping the Dream Wielder Charm for this fight makes it easier to use the Dream Nail.

While in Godhome, in the Pantheon of the Sage or the Hall of Gods, Quirrel is no longer at the Knight's side to break Uumuu's protective membrane. However, Uumuu does gain a new attack that can be turned against it. Uumuu is also slower in this incarnation.

Uumuu has all the same attacks as its regular form with one new one, that can be used to make it vulnerable:

There are a couple of methods of making Uumuu vulnerable:

Otherwise, the fight stays relatively the same, with the same dodging tactics.

Uumuu is located in the centre of the Teacher's Archives.

Arena in the Teacher's Archives