Trial of the Warrior

Trial of the Warrior

Defeat waves of enemies as the first Trial in the Colosseum of Fools.

The Trial of the Warrior is the first trial in the Colosseum of Fools available to the Knight.

Upon clearing it for the first time, the Knight receives a Charm Notch,

Zote the Mighty only appears as the final opponent after he has been saved in Greenpath and Deepnest and can only be defeated in the trial once.

For the Shielded Fools in wave 1, they can be hit once as soon as they spawn.

For wave 2, the Sharp Baldurs can be triggered one at a time. This will give time to heal.

The Sturdy Fools in wave 3 can be killed using the same strategy as Husk Miners.

For waves 4 and 5, rush the Primal Aspids down. By staying on the rightmost or leftmost platforms there is a window to heal.

For wave 6, the Sturdy Fools on the top platforms are no hassle and they can be easily avoided by using the Shape of Unn Charm.

In wave 7, get onto the highest platform to easily kill the Primal Aspids without being harmed by the Sharp Baldurs. 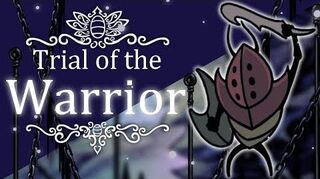