Squits are enemies in Hollow Knight. They are flying creatures who charge at prey with their razor-sharp proboscis.[1][2] A stronger variant called Armoured Squit is bred to fight in the Colosseum of Fools.[3]

Squits hover in the air until the Knight comes in range, at which point they hiss and lunge at them, not stopping until they hit the Knight or a part of the environment.

It is possible to stop a Squit by attacking it mid-charge. This sends it flying away a short distance before it reorients itself, becoming stunned momentarily if it hits a wall. It is usually a better idea to bait it into slamming itself against the ground, then killing it before it recovers.

They are found in Greenpath and the Overgrown Mound. 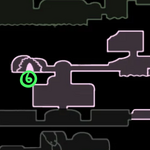 Retrieved from "https://hollowknight.fandom.com/wiki/Squit?oldid=96486"
Community content is available under CC-BY-SA unless otherwise noted.