The Soul Warrior is a recurring mini-boss with varying difficulty in Hollow Knight. It appears twice in the Colosseum of Fools as a mini-boss. Unlocking its Journal entry requires defeating it twice.

Soul Warriors are scholars who enhanced their combat abilities with stolen Soul.[1] Unlike the other scholars in the sanctum, they seem to have a very hazy grasp of their own memories and the origins of their powers.[2]

Two Soul Warriors can be fought in the Soul Sanctum. One guards the main access to the Sanctum's upper levels. The other guards the side wing locked with the Elegant Key and summons up to 24 Follies to help it. Two more can be fought during the Trial of the Fool in the Colosseum. The first one summons up to 9 Follies and the second is assisted by a Soul Twister. Soul Warriors always ambush the Knight by teleporting above them and slashing down right as the battle begins.

Like most other enemies in Hallownest, they are Infected, though they do not explode upon death.

Soul Warriors teleport around the arena and use the following attacks:

The best chance to hit it is right after its Dive-Slash attack, by sidestepping and getting in as many attacks as possible before it recovers, or, right after its Dash-Slash attack, either by jumping over it and down-striking or moving just out of the attack's limited range. Since Soul Warrior stays on the ground, its homing orb is more predictable than the ones fired by Soul Twisters and the Soul Master.

Two Soul Warriors are fought in the Soul Sanctum, one of them guards the Shade Soul Spell. Two more are fought during the Trial of the Fool in the Colosseum of Fools.

Soul Warrior fighting in the Colosseum of Fools

Arena in the area opened by Elegant Key 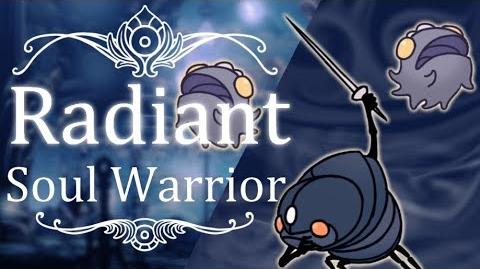