The Shade is an enemy in Hollow Knight. It is the Void within the Knight which is let loose when the Knight's shell breaks.[1]

When the Knight dies, a Shade appears in or before the room they died, holding all the Geo that was lost. Until it is killed, the Knight's SOUL meter is broken, limiting it to 66 charge (this does not affect the storage of SOUL in Soul Vessels).

When approaching its location, an off-key music box melody is heard that drowns out all other sounds, signalling its presence. Upon engagement, it floats in the Knight's direction and attacks by swinging its Nail when getting close and using any Spells the Knight has learned. If the Knight moves too far from the Shade's spawn point while it is pursuing them, it turns into smoke and returns to its spawn point.

Hitting the Shade with the Dream Nail defeats it instantly, regardless of its remaining health.

If the Knight died to a boss, the Shade usually spawns in a safe location to be recoverable without triggering the boss battle. If the Shade is in a hard to recover position, try hitting it from a distance with Vengeful Spirit/Shade Soul to draw its attention.

If the Shade is killed, the Knight's SOUL meter is returned to normal and they regain all the Geo that was lost upon death. If the Knight dies before killing the Shade, a new Shade appears at the new death's location and the old one disappears. Killing the new Shade still fixes the SOUL meter, but all the Geo carried by the previous Shade is lost. For example, the Knight has

3000. A new Shade spawns on the most recent death location and the new Shade only carries

The Shade's health is calculated as: Nail damage times half of the Knight's max HP at death rounded down.[Note 1]

Found at the location where the Knight has most recently died. A pin of the Shade can be seen on the Map which marks its location.

Alternatively, Confessor Jiji in Dirtmouth offers a service to summon the Shade to her room in return for a Rancid Egg. This is useful if the Shade is very far away from the last checkpoint or in the middle of a hard platforming section.

Attacking with its Nail 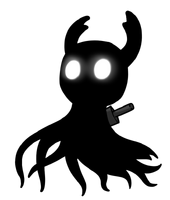