Seth is an upcoming NPC and boss in Hollow Knight: Silksong teased by Matthew "Leth" Griffin in the Hollow Knight Discord after members were able to solve a series of 2 riddles.

Little more is known about him except for a description and 2 gifs also provided by the same source.

"The Voice… has chosen me."

An eternal protector, waiting amidst tangled roots at the base of the Citadel. He guards a secret long forgotten and will attack any who stray too close.
Imbued with stamina and strength beyond a normal bug, he strikes up close or from a distance with blinding speed. With unwavering devotion, this ancient guardian will fight until the very end, and beyond.
Many of the Citadel’s caste have fallen to this deadly warrior. Those who encounter him should turn back, or else prepare for a vicious battle.

The character of Seth was developed together with Seth Goldman, who's a really cool young guy we were fortunate enough to meet and get to know. Thanks to the Marty Lyons Foundation for hooking us up with Seth. Huge thanks to Seth himself! And look forward to entering battle with his deadly bug warrior! 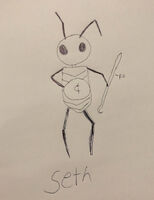 Retrieved from "https://hollowknight.fandom.com/wiki/Seth?oldid=95776"
Community content is available under CC-BY-SA unless otherwise noted.