The Radiance is the secret final boss of Hollow Knight.

Absolute Radiance is her perfect form.

The Radiance is a higher being[3] of light similar to Essence, and as such, opposed to the Void, her ancient enemy.[4][5] The Moth Tribe is born from her light and in return revered her.[4]

From her prison, the Radiance, heart of the Infection, plagues the dreams of bugs. She infects Myla[20], causing her to attack the Knight, and uses Lightseeds and Infected flies to reanimate the Broken Vessel and the Watcher Knights. After killing at least one Dreamer, or obtaining the Monarch Wings, the Infection worsens in the Forgotten Crossroads, turning it into the Infected Crossroads, and making its bugs more violent and dangerous.

Her fate is linked to the end of the Knight's journey. By defeating the Hollow Knight, the Knight is able to seal the Radiance within, taking the place of their sibling within the Black Egg. 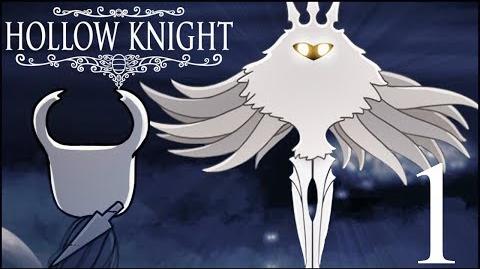 To access the Radiance, the Knight must have acquired Void Heart and have used the Dream Nail on the Hollow Knight when Hornet holds them down. The Radiance does not count as a regular dream battle, so the Hollow Knight needs to be fought from the beginning on every death.

In the first Phase of the fight, she levitates slightly above the floor. Only her body is vulnerable to attack, which requires jumping or ranged attacks. She often teleports around, making it even harder to get a good string of hits while avoiding her own ruthless attacks.

The Radiance does not deal contact damage; however, all of her attacks except summoning spikes deal two Masks of damage. Falling off the platform only deals one Mask of damage.

The Radiance has a wide variety of attacks, each with a variety of mitigations.

The Radiance can only be Dream Nailed during Phase 4 of the fight.

The Radiance's fight can be accessed by using the Dream Nail on the Hollow Knight in the Temple of the Black Egg.

The Radiance being dragged into the Void

Dream in which the Radiance is fought