Quirrel is an inquisitive, up-beat explorer, fascinated by the myths of Hallownest for reasons he cannot explain. While he remains a simple observer, he is wise of the land's dangers and has some skill with a nail.[1]

Before the fall of Hallownest, Quirrel used to be Monomon’s apprentice.[3] When Monomon became a Dreamer, she entrusted Quirrel with her mask, which was part of an additional protection enacted upon herself.[4] Quirrel can be seen wearing this mask on top of his head. In the official comic, it is shown that Quirrel ended up outside of Hallownest

Quirrel lost much of his memory eventually.[5] He was called back to Hallownest by Monomon in order to reverse the protection placed on her.[4] He had dreams of Hallownest; the City of Tears, Fog Canyon, the Forgotten Crossroads, the Temple of the Black Egg, and the Hollow Knight. After entering the Howling Cliffs, Quirrel meets Hornet, whom he briefly fights. Hornet allows Quirrel to enter Hallownest when she recognizes Monomon’s mask.

Quirrel can initially be found at the Temple of the Black Egg, but he can be encountered in several locations around Hallownest. After helping the Knight kill Monomon by removing the protection on her, he goes to the Blue Lake to see the source of the rain in the City of Tears.[6]

Temple of the Black Egg

Quirrel is first met staring at the Black Egg in wonder. He briefly talks about how he feels drawn to Hallownest.[7] He is aware that both the Knight and himself are ill-equipped for this perilous journey. He explains that many travellers have come down into the ruins and fallen, and lightly suggests that they may have useful belongings that the Knight could use.[8] He leaves if the Knight enters the room west of the False Knight.

Quirrel is found sitting on a rock next to the Bench inside the structure, polishing his nail. He tells the Knight that their Nail is looking a little worn and that they may not fare as well below the surface.[9] He leaves if the Knight acquires the Mantis Claw.

Inside the station, Quirrel can be found sitting on the edge of a platform above the entrance to the Stagway. He comments on the activity such place must have had during the kingdom's peak.[10] He leaves if the Knight acquires the Mantis Claw or leaves Queen's Station.

Quirrel is found sitting on a Bench on the way out of the first building in the City of Tears, looking out the window. He tells the Knight he feels pulled into the city, but is hesitant to enter, not knowing why.[12] He mentions the water coming down endlessly from above and that he wants to see where it comes from before he leaves the Kingdom.[6] He leaves if the Knight defeats Soul Master or later encounters him in Crystal Peak.

Quirrel is found resting in the Hot Spring in Deepnest after the Failed Tramway has been visited. He hints at the existence of a village in Deepnest, home to those who never accepted Hallownest's King.[13] He leaves if the Knight listens to him.

Quirrel is found standing next to a huge window at the peak, looking down onto Dirtmouth, pondering. He also comments on the sad fate of the Infected miners relentlessly at their endless task.[14] He leaves if the Knight acquires the Crystal Heart or later encounters him in the City of Tears.

Outside the Teacher's Archives

Quirrel is found just outside the entrance to the Teacher's Archives, somewhat confused, feeling drawn inside.[15] After entering this room, he can no longer be found at any of the prior locations in Hallownest. He later appears during the Uumuu boss fight to help the Knight by puncturing the outer membrane of the boss, allowing the Knight to damage them.

After inspecting the tank that Monomon the Teacher is inside, Quirrel jumps up from below. He explains the history of the Teacher and that he played a part in her protection. He holds up his hat, which is revealed to be Monomon's mask, and undoes that protection to help the Knight.[4] If the Knight has not yet acquired the Dream Nail, Quirrel suggests they find the Moth Tribe to learn from them how to enter Monomon's mind and break her seal.[16] After Monomon is killed, he sits there until the Knight leaves. He does not wear Monomon's mask again after this encounter.

In the final encounter with Quirrel, he is found sitting next to the Blue Lake, as he said he would want to see where the rainwater is coming from in the City of Tears. He tells the Knight that now, after seeing the world twice over, he finally feels at peace, and he is thankful he could see its beauty again.[17]

After the conversation, the Knight can choose to sit next to him in silence. Doing so rewards the Witness achievement.

After leaving the room, Quirrel disappears. His nail can be seen planted into the ground beside the Lake.

Quirrel can be found in several locations across Hallownest. However, he does not appear in all of them after he is encountered in Fog Canyon.

In the Mantis Village

Looking out over Dirtmouth in Crystal Peak

At the Archive's entrance

Quirrel at the Blue Lake 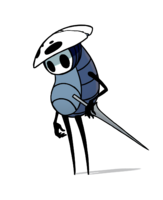