Defeat the 42 Bosses of the Pantheon in a row

The Pantheon of Hallownest is the fifth and final Pantheon in Godhome. Access to this Pantheon is unlocked after completing the Pantheon of the Knight. Instead of tuning bosses, the Void Heart Charm must be acquired to enter it.

Enemies in this Pantheon are harder versions compared to the previous Pantheons. The number of enemies per fight and arena layouts are changed to their Ascended difficulty version in the Hall of Gods. However, they retain the same amount of health and do their usual amount of damage.

Completing this Pantheon gives either of the two endings added with the Godmaster update, depending on whether a Delicate Flower has been given to the Godseeker.

Despite its name, the Pantheon of Hallownest does not contain every boss in Hallownest. Nosk, Hollow Knight, Radiance, Mantis Lords, and Zote do not appear, though all are replaced by their stronger variants. There are 42 bosses in total that have to be fought in this Pantheon.

Pantheon of Hallownest when not having Void Heart

Image shown when inspecting the Pantheon without having Void Heart

Pantheon of Hallownest after being unlocked

Pantheon of Hallownest after completing it with all bindings at once

Pantheon of Hallownest (no Final Boss)
Discussions about the pantheon, does not include Absolute Radiance 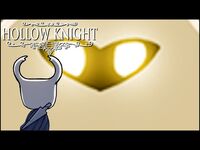