Paintmaster Sheo is a quest boss in Hollow Knight, introduced in Godmaster. He sits at the top of the Pantheon of the Artist in Godhome.

Paintmaster Sheo is the final boss of the Pantheon of the Artist, the second of five Pantheons located in Godhome. He uses different colour paint blobs to attack, and his signature Nail Art, the Great Slash, is performed during his Great Slash attack. Unlike Oro and Mato, he does not use a great nail and he can be staggered, requiring 12 hits.

A well-timed Shadow Dash means the Knight can always dash through incoming paint in every attack, including the Paint Spear attack. Shadow dashing is best to do when the Knight is just about to get hit by paint. Due to Sheo's size, the Sharp Shadow Charm is useful, especially if the Knight gets stuck in a corner.

Nail Arts (especially Great Slash and Dash Slash) are a good response to all of Sheo's attacks, especially if using the Nailmaster's Glory Charm. This lets the Knight have a Nail Art ready after every attack.

It is best to stay on the ground for every attack except when dodging the Paint Spear.

Paintmaster Sheo's attacks happen quickly, so the Quick Focus Charm is highly recommended. Healing is even easier when Quick Focus is combined with Shape of Unn, as the Knight can heal while moving around and dodging paint blobs. This combo allows for safe healing during any of the Paintmaster's attacks except the Paint Spear attack.

However, there are always opportunities to heal without the help of Quick Focus. The Knight can heal during every attack: while Sheo charges and during the explosion of the Great Slash; during the Paint Stomp attack (this requires proper spacing within the gaps between blobs or dashing through Sheo when the attack starts); during the Paint Splash (again, this requires proper spacing in the gaps between the blobs; do NOT stand under Sheo); and during the Paint Spear (by shadow dashing through Sheo first). The Knight can heal 2 or more Masks when Sheo is staggered. 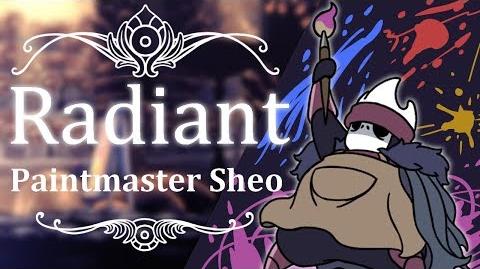