Nosk is a hidden boss in Hollow Knight. Its defeat is rewarded by one of the rare Pale Ores.

Winged Nosk is its flying form.

Nosk is a mysterious, shape-shifting, Infected beast hunting throughout Deepnest.[1] It can mimic the shape of faces it finds in the memories of bugs, usually loved or departed ones, and can contort its body to assume a smaller frame.[2][3] It hangs its prey, including Dirtcarvers, a Stalking Devout, and various Vessels, from the ceiling of its lair at the bottom of Deepnest.

When first encountered in Deepnest, Nosk looks exactly like the Knight. It can first be seen in an unreachable location before the long drop to the area's Hot Spring. After this, it can only be encountered in the hidden maze of tunnels leading to its lair. There it appears in several places and disappears before the Knight reaches it.

The way to Nosk's lair is littered with various dead bugs, their thoughts hinting at the creature's treachery.[4] In the last tunnel, barriers of organic matter close one after another behind the Knight. Once reaching its lair, Nosk reveals its true form through a grotesque transformation, before roaring and beginning the fight.

When defeated, Infection bursts out of Nosk making it explode. It leaves behind only its counterfeit shell amidst puddles of Infection. The Knight can then collect a Pale Ore from a fossil in a cave further along.

Nosk, like all other strong creatures of Hallownest, is summoned to Godhome by the ritual of the Godseeker. It appears in the Pantheon of the Artist, but takes a winged form during the Pantheon of Hallownest. It first assumes the shape of Hornet and retains her shell as a face throughout the fight. 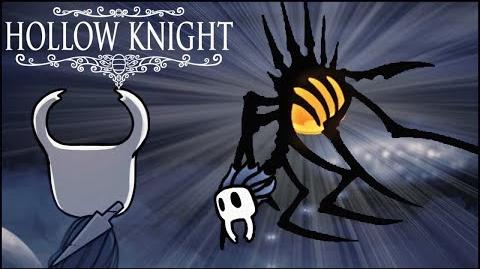 Nosk moves quite fast and takes up a lot of space which can make it challenging to avoid Nosk.

The Shade Cloak is a very strong upgrade against Nosk, allowing the Knight to nullify all Charge attacks. Adding the Sharp Shadow Charm is a good way to add damage to those dodges.

Even though Nosk is out of sight during the Rain attack, its hitbox is still present in the ceiling and Charms such as Grimmchild and Glowing Womb can track and hit it. Furthermore, hitting it with the Nail in this state is also possible, and using charms like Longnail or Mark of Pride can make it easier when trying to do so.

If the Knight is caught by the Eruption Attack, a quick dash away is a good tactic for surviving. There is a sizeable gap between the blobs at Nosk's feet and the blobs that fly in the arc.

It is important to keep moving to dodge the Rain attack. Nosk attempts to track the Knight with these blobs, so standing in one place is dangerous. This is the only attack that is not nullified when hiding against the middle platform.

Nosk primes its Charge always with a quick small screech, using this sound to predict when it is about to Charge from off-screen can be very helpful. Be wary that Nosk most often prefaces an Eruption attack by Charging to the centre of the arena.

Spells can be very effective against Nosk. Desolate Dive/Descending Dark is a good response to all of Nosk's attacks, except the Rain attack. The Howling Wraiths/Abyss Shriek Spell is effective when hiding against the middle platform. It is also a good way to damage Nosk when it is in the ceiling during a Rain attack.

A breakable wall in the room directly west of the Deepnest Hot Spring reveals a secret section containing a Grub. Breaking another wall behind the Grub leads to the tunnels and into Nosk's lair. Either the Monarch Wings or Crystal Heart is required to access the hidden room. It is also possible to use the Nail to Nail-bounce on the Shade if it is lured near the first breakable wall.

Nosk as shown in the Wanderer's Journal

Other concept art for Nosk