The Nailsmith is a Merchant in Hollow Knight. He provides a service to strengthen the Knight's Nail for Geo and Pale Ore. He provides the first Nail refinement for Geo only, after which he requires Pale Ore and Geo to upgrade further (see Nail for prices).

The Nailsmith is one of the few bugs that lived through the fall of Hallownest. Driven by his craft and working in seclusion, he barely noticed the world changing around him.[3] Even before that, he hardly paid attention to the Kingdom's Five Great Knights.[4] He spends his time honing his craft, hoping to forge one day a Pure Nail, the apex of his work.[5][6] There are many nails surrounding his hut.

The Nailsmith can be found at his smithy in the outskirts of the City of Tears, in an isolated hut. At first, he can refine the Old Nail into the Sharpened Nail for a small amount of Geo. After that, he requires both Pale Ore and Geo to upgrade it further, with the price and the number of Pale Ore increasing with each successive upgrade.

After having him forge the Pure Nail, the Nailsmith steps outside and asks the Knight to cut him down. Obliging him sends him plummeting down to the waters below. His corpse can be found in the

Pantheons and speaking to

This awards the Purity achievement. When not granting his request to "cut him down" and leaving the area, he can be found with Sheo in his hut in Greenpath and listening to him awards the Happy Couple achievement.[7]

He then remains in Sheo's hut for the rest of the game, engaging in modelling for Sheo and making wooden figurines together.[8] The achievement name, Happy Couple, implies Sheo and the Nailsmith are in a romantic relationship.[9]

The Nailsmith does not move to Sheo's hut if the Knight has not acquired Great Slash. He disappears after being spared and only appears in Sheo's hut after the Knight has gained the ability and rested on a Bench afterward.

The Nailsmith is initially located in the west part of the City of Tears. Later on, he moves to Sheo's hut in Greenpath if he is spared.

Location in the City of Tears 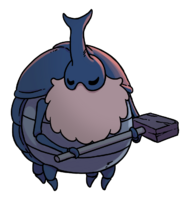 "Follow a twisting path from the outskirts of the drowning city. Cross a broken bridge and you'll hear it close, the ring of metal and the roar of flame. A craftsman obsessed.
Within his forge the Nailsmith is searching, on an endless quest to create a flawless nail.
Past failures pile outside his door, exposed to the rains and left to rust. He spares no thought for imperfect things. Nor does he pause to take notice of the countless beings that take their pick of his refuse.
But his neglect has impact. His discarded nails have spread wide through Hallownest, clutched tight in the hands of creatures possessed.
Only in the Hollow Knight's broken nail does he at last see true potential. Distant and difficult to achieve, but it is in there, waiting - a blade to be honed beyond all others, to be forged into a form so brilliant it transcends its metal and becomes myth."[11]