Myla is an NPC in Hollow Knight. She is a happy little miner mining for treasure near the entrance to Crystal Peak.

While searching for something valuable hidden deeper within the crystals,[3] she enjoys singing and wants to come up with some songs of her own.[4] Myla hears the crystals singing and whispering, hoping to find them and hear what they are saying.[5]

Eventually, Myla becomes Infected, her cheerful song changing. The voice of the Radiance appears in her mind, commanding her to kill the Knight.[6] In the end, the Infection overtakes her, making her become hostile. However, the song she always sang remains in her thoughts.[7]

Myla is located in the Forgotten Crossroads. When first met, she is mining and gleefully singing, hoping that the Knight comes to visit her again later.

Once the Vengeful Spirit Spell has been acquired, her dialogue changes. After Soul Master has been defeated, she starts showing signs of being Infected.

After obtaining the Crystal Heart, Myla turns into another fully Infected Husk Miner. Using the Dream Nail on her during this state gives unique dialogue. If she is killed, she lets out a cry upon death.

Myla can be encountered in the northeast part of the Forgotten Crossroads, near one of the entrances to Crystal Peak. 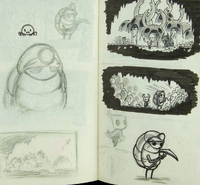 Retrieved from "https://hollowknight.fandom.com/wiki/Myla?oldid=97517"
Community content is available under CC-BY-SA unless otherwise noted.