The lands of Hallownest are filled by several groups of strange sentient creatures. They occupy various territories around the vast kingdom and developed their own societies and cultures aside from the Pale King's rule. 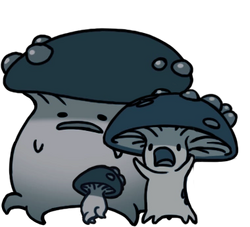 The Mushroom Clan is made up of a species of sentient mushroom-like beings, neither bugs nor plants.[1][2] They took residence in the Fungal Wastes bordering both the City of Tears and Deepnest, where they hide among the scenery. These territorial creatures possess a hive mind and developed their own language.[1][3] The Lore Tablets they leave can be translated by wearing the Spore Shroom Charm. 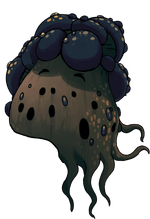 The creatures can grow, from the young and inoffensive Shrumelings to the more dangerous Shrumal Warriors and Ogres.[4][5][6] The body of a giant Fungal creature can also be found at the heart of the Fungal Core. While they accepted the rule of the Kingdom of Hallownest for the prescience of the Pale King, they opposed incursions of Deepnest's beasts on their territory.[7][8] Like most of the Kingdom, they were affected by the Infection and attack any intruder to protect their young ones.

While they share a mushroom-like appearance and the same language, Mister Mushroom is not one of them. He has a mind of his own and his own agenda throughout Hallownest.[9] Though the Lore Tablet in Kingdom's Edge suggests some sort of worship by the Mushrooms with Mister Mushroom as the deity.[10]

A Shrumal Warrior in the Fungal Core

Shrumal Ogres in their mushroom forms

The corpse of a fungal creature found in the Fungal Core