Mister Mushroom is a talking mushroom NPC found throughout Hallownest after all three Dreamers have been killed. His babbles can be heard from a distance, guiding the Knight to his location. He is also referred to as the Herald or Master Herald.

Finding him in all seven locations and ending the game rewards the Passing of the Age achievement and a secret cutscene after beating the game.

To understand what he says, the Spore Shroom Charm must be equipped, otherwise, he speaks gibberish and does not move to the next location. However, his Dream Nail dialogue is not gibberish, even without Spore Shroom.

The Riddle Tablet is a glowing glyph in a secret room at the bottom right corner of Kingdom's Edge. When it is read with the Spore Shroom Charm equipped, the tablet reveals a poem, which gives hints to the locations where Mister Mushroom can be found:

We speak the path of the Master Herald, he who would signal an Age's end.

He can be found in 7 different locations. Each one must be visited in the order described on the Riddle Tablet in order for him to progress to the next location.

Mister Mushroom in the Fungal Wastes

Mister Mushroom in the Howling Cliffs 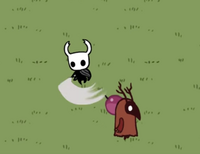 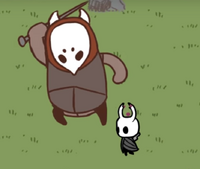 Retrieved from "https://hollowknight.fandom.com/wiki/Mister_Mushroom?oldid=97498"
Community content is available under CC-BY-SA unless otherwise noted.