Menderbug is an enemy in Hollow Knight. He can be found repairing the sign at the bottom of the well in the Forgotten Crossroads.

Menderbug has a 2% chance to spawn at the entrance of Forgotten Crossroads right below Dirtmouth. To spawn, the following conditions must be met:

Upon seeing the Knight, Menderbug quickly flies away and leaves the room.

To kill Menderbug, enter the Forgotten Crossroads from Dirtmouth using the Desolate Dive/Descending Dark Spell. This destroys the sign upon landing and, if he has spawned, also kills Menderbug. Alternatively, by pausing and then unpausing while falling, the Nail can be used to kill him before landing. He can also be seen when entering the room through the east and west doors of the Forgotten Crossroads, and can be killed with Vengeful Spirit/Shade Soul. This requires less SOUL and doesn’t require killing Soul Master to get Desolate Dive. However, this method takes significantly more time and makes it easier to fail to kill Menderbug. One of the easiest ways to catch him is in the late game after acquiring Kingsoul and/or Salubra's Blessing to refill SOUL easily.

After killing Menderbug, his house is unlocked. The house can be found in the same village where Sly is first found infected.

Menderbug is located beneath the well in the Forgotten Crossroads. 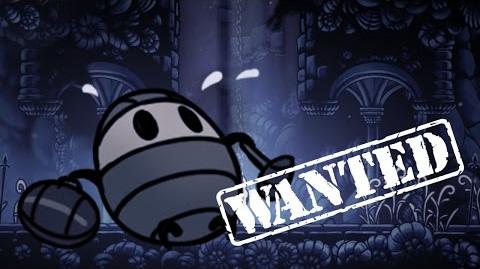 Hollow Knight - Menderbug
Video on how to spawn and kill Menderbug