The Massive Moss Charger is an optional mini-boss in Hollow Knight. It lies off the Pilgrim's Way in Greenpath.

The Massive Moss Charger can be found below a ruined structure, just off the Pilgrim's Way before leaving Greenpath for the Fog Canyon. It first appears as a large bush but starts shaking as the Knight approaches and eventually roars before giving chase. Once defeated, it is revealed to be a group of Moss Chargers (without their moss) which scurry away and crawl underground.

Fighting the Massive Moss Charger is not necessary to progress past its room.

The Knight is not locked into this fight, meaning that it is possible to escape the fight at anytime.

Unlike regular Moss Chargers, hitting it does not expose the vulnerable bug within the moss.

Standing near the edge of the room often results in the Massive Moss Charger getting stuck on the edge for a fraction of a second during its Belly-flop attack. This can be used to buy time and dash out of the way.

Having the Quick Slash and/or Heavy Blow Charms equipped means Massive Moss Charger can be defeated solely by rapidly attacking it during its Charge animation.

The Massive Moss Charger is located in the southwest part of Greenpath near Fog Canyon. 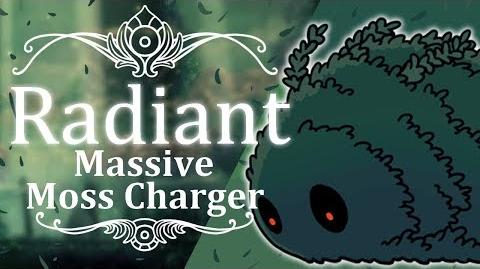 Current Hunter's Journal icon which is shared with the Moss Charger

Hunter's Journal icon prior to the Lifeblood update