Sisters of Battle (Godhome and Pantheon of the Artist

The Mantis Lords are an optional boss in Hollow Knight. Defeating them grants safe passage through the Mantis Village. The

Sisters of Battle is their stronger form.

The Mantis Lords are three sisters who lead the Mantis Tribe deep within the Fungal Wastes.[3] They managed to resist the Infection throughout Hallownest[4] despite the exile of their brother and his followers, who chose to accept the Infection willingly.[1]

The Mantis Lords have kept the beasts of Deepnest confined to their territory, killing those who would intrude upon the village.[5] This duty was part of a truce with the Kingdom, maintained even as it fell to ruins.[6] Yet the Mantis Lords, like the rest of their Tribe, remain proud warriors. They grant passage into Deepnest to any who would defeat them in a fair challenge, in an improvised arena in their throne room.

At first, a single Mantis Lord battles the Knight. After her defeat, she regains her throne and the remaining two join the battle together. Once all three have been defeated, they bow respectfully to the Knight and allow them passage into Deepnest. The other members of the tribe express the same respect and refrain from attacking the Knight. Additionally, the Knight can access the rest of the village, containing a Bench. They can also collect a bounty in Geo, a Hallownest Seal, and a new Charm, the Mark of Pride.

One of the three Mantis Lords drops into combat and uses the following attacks in Phase 1:

In Phase 2, the two remaining Mantis Lords drop into combat:

In Phase 2, with the exception of the Boomerang attack, the Mantis Lords attack independently of each other, making it possible for a number of move combinations.

After a Mantis Lord has been defeated in Phase 2, the remaining one keeps fighting, and the rest of the fight plays out like Phase 1. 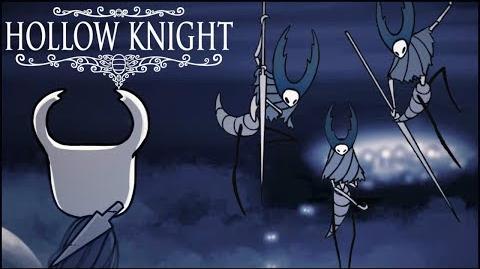 It is recommended to initiate this boss fight after at least one Nail upgrade.

The Mantis Lords do not initiate battle until the Knight challenges them. At this point, a steel cage prevents escape from the arena, with spiked pits to the left and right of the cage.

The battle begins against a single Mantis Lord. She uses one of three attacks, disappearing in a blur after each one. The Knight must react quickly to dodge the attack, then strike the Mantis Lord before she vanishes.

As the Mantis Lord loses health, the attacks become faster and faster. The best moment to heal is during the Boomerang attack, as it is easiest to dodge and takes the longest time to complete. As with most bosses, the Quick Focus Charm is immensely helpful, despite its high cost.

Once the first Mantis Lord has been defeated, she returns to her throne. At this point, the two remaining ones engage in tandem. The battle remains fundamentally the same, but the attacks come far more frequently, and the patterns of the Boomerang attack change.

Once one of the two Mantis Lords goes down, the remainder of the battle becomes significantly easier, but since there is no visible difference between the two, it is impossible to focus on one over the other.

Keeping to one side of the stage keeps the fight more consistent, as the Mantis Lord farther from the Knight typically sticks to the Boomerang attack, and the closer one uses melee attacks. However, keeping away from the corners of the stage prevents taking contact damage from the Mantis Lords teleporting to perform the Dash attack.

Dreamshield Charm can block the boomerangs. They can also be Nail-bounced on.

When the two remaining Mantis Lords perform a Boomerang attack with a shorter arc, it is possible to avoid the attack by standing in the centre of the arena, as the blades do not travel low enough to damage the Knight. This gives enough time for the Knight to heal two Masks, even without Charms.

It is possible to duck underneath the Mantis Lords with the Shape of Unn Charm when one of them is performing a Dash attack. This makes healing significantly easier.

There is a Lifeblood Cocoon that can help with the fight in the northwest corner of the room, behind a breakable wall, which can be accessed by using the Mantis Claw to climb up the sealed door to Deepnest. Both the Crystal Heart and the Monarch Wings make reaching the Cocoon easier.

The area that the Mantis Lords are located in can be accessed after obtaining the Mantis Claw and activating a lever in the northeast part of the Mantis Village.

Mantis Lords bowing after the battle