Lost Kin is a hidden boss in Hollow Knight. It is the Dream variant of the Broken Vessel, faster and tougher than its physical counterpart.

Lost Kin shares its basic attacks with Broken Vessel but attacks at a much faster pace. Notable changes are: 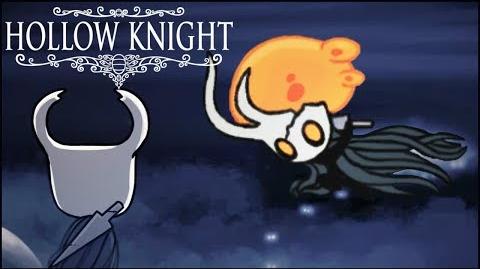 Dealing with the Infected Balloons can be the trickiest part of the fight as the rate they spawn can prevent healing. Unnecessary damage can also be taken when trying to dodge Lost Kin's attacks and colliding with them.

Pantheons, where Lost Kin is not fought in isolation, as it is generally more useful against other bosses than Defender's Crest.

As with Broken Vessel, it is recommended to stay low to the ground as Lost Kin jumps around a lot. The only reason that would warrant jumping would be to avoid the Slash attack.

Like Broken Vessel, Lost Kin takes knockback from attacks. As such, the Vengeful Spirit/Shade Soul Spell is useful against it as well, especially when combined with the Shaman Stone Charm. Desolate Dive/Descending Dark is an all-around good Spell to use in this fight thanks to its invincibility frames and range to clear Infected Balloons too. The constantly spawning Infected Balloons also allow for speedy acquisition of SOUL and extremely aggressive use of Spells given the limited chances to heal during the fight.

Lost Kin also staggers very easily, meaning that using the Quick Slash Charm can easily knock it down and allow for a moment to heal.

As with the other Dream Bosses, the Knight does not die when they lose all their health during this battle, but simply wakes up next to Lost Kin. This means that the Fragile Strength and Fragile Heart Charms can be used continually without breaking.

If the Shade Cloak has been acquired, it is technically possible to dash through Lost Kin's Slash attack. However, this is inconsistent as Lost Kin is extremely fast and can sometimes perform the Slash attack before the Shade Cloak has time to recharge, additionally, if the dash is used too early or too late, it results in unnecessary damage. It is better to down strike Lost Kin during the Slash attack instead, as this allows for more consistent damage.

Broken Vessel needs to be Dream Nailed, and it can be found where it was first defeated, near the far left corner of the Ancient Basin, guarding the Monarch Wings Ability.