The Knight is the protagonist and playable character of Hollow Knight.

The Knight is a discarded Vessel.[3][4] They are the child of the Pale King and the White Lady,[5][6] born in the Abyss with Void inside their shell.[7][8] Hornet is the Knight's sister through their shared father.[9][10] Like the rest of their Vessel siblings, the Knight is genderless.[2][11]

Eventually, the Knight ended up wandering outside of Hallownest for unknown reasons.[14] Spending time in this area caused the Knight to lose their memories, but being there did give them a certain resilience.[15][14] They returned to Hallownest after a call went out from either the Radiance or the Hollow Knight.[16][17]

After encountering the Dreamers in the Resting Grounds, the Knight acquires the Dream Nail. With this weapon, they can break the Seals in the Temple of the Black Egg by killing each of the three Dreamers. This allows them to enter the Black Egg, where they can fight the Hollow Knight. If the Hollow Knight is faced before obtaining Void Heart, the Knight kills their sibling and takes their place in sealing the Radiance.

If the Knight has fought Hornet twice and has the King's Brand and the Shade Cloak, they have access to both halves of the Kingsoul. When the complete Kingsoul is equipped, the Knight can transform this charm into Void Heart by going to their birthplace at the bottom of the Abyss and remembering their past.[8][15] Void Heart allows the Knight to unify the Void under their will.[18]

Using the Dream Nail initiates the fight with the Radiance. At the end of this fight, the Knight breaks their shell and lands the finishing blows on the Radiance in their Shade form, with the help of the Shade of the Hollow Knight. Both siblings and all the other Shades in the Abyss then return to the Void.

In Godhome, the Knight can ascend by attuning all the Gods of Hallownest and defeating them in the Pantheons.[19] In the Pantheon of Hallownest at the end of the fight with Absolute Radiance, the Knight breaks their shell and their Shade falls into the Void. The Void Entity then appears which kills Absolute Radiance, after which Void starts leaking from Godseeker's body in Junk Pit and eventually bursts out of her. If Godseeker was given a Delicate Flower, the Void and Godseeker disappear instead. 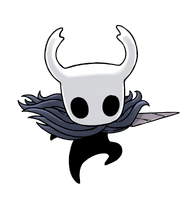 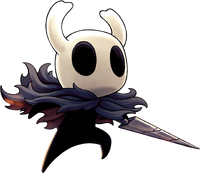 Retrieved from "https://hollowknight.fandom.com/wiki/Knight?oldid=93798"
Community content is available under CC-BY-SA unless otherwise noted.