Kingsmoulds are enemies in Hollow Knight. They are Void constructs who were made by the Pale King to serve as guards in and around the White Palace.[1][2]

Upon seeing the Knight they stomp twice and then attack. When triggered they deal two Masks of damage with every attack and attack at a very fast pace, making them a formidable foe. Contact damage only deals one Mask of damage. They do not respawn upon death except for the ones in the

Kingsmoulds are also immune to Spells if stationary and not yet activated in combat.

Path of Pain. The corpse of a Kingsmould can also be found in the Palace Grounds.

Kingsmoulds locations within the White Palace. Unofficial map by MolaMolasses

Concept art for the Kingsmould with the name "Dusk Knight" 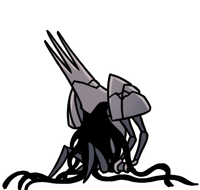