Husk Guards are enemies in Hollow Knight. In life, these bugs used to be guards of the Forgotten Crossroads.[1] Reanimated after death, they still instinctually guard their former posts.[1]

Stands in place until disturbed. Once engaged, it rushes into battle, using two attacks:

It is possible to hit the Husk Guard once, then run out of its range before it can bring down its club, however, the window to strike is quite small. This is easier later on with the Mothwing Cloak.

If the Husk Guard does a Shockwave attack, simply jump over the wave. It is usually possible to jump towards the Husk Guard and get one or two hits in after this attack.

The Husk Guard met before facing False Knight can be damaged from a safe zone, by going on the platform on the right. When it uses its club, it can be damaged.

Guard station in the Forgotten Crossroads 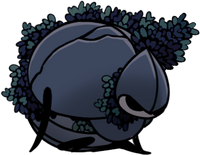 Sitting corpse of a Husk Guard in Fog Canyon 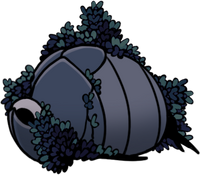 Laid down corpse of a Husk Guard in Fog Canyon 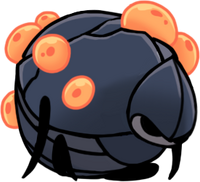 Corpse of an infected Husk Guard in the Infected Crossroads