View source
watch 02:46
The Quarry - The Loop
Do you like this video?
Play Sound
For the playable Silksong protagonist, see Hornet (Silksong).

Hornet Sentinel is the second form of Hornet as a boss in Hollow Knight. She challenges the Knight at the entrance to the Cast-Off Shell in Kingdom's Edge to test their resolve and strength in saving Hallownest. She deploys this time her full strength and tools. She must be defeated twice to unlock her Journal entry, but this can be either by defeating both forms or by defeating her Protector form once in Greenpath and once in

Hornet Sentinel uses tactics similar to her Protector form, but her attacks come at a much more rapid pace. The range of the area of effect on her Gossamer Storm attack is also larger. Her base attacks remain: 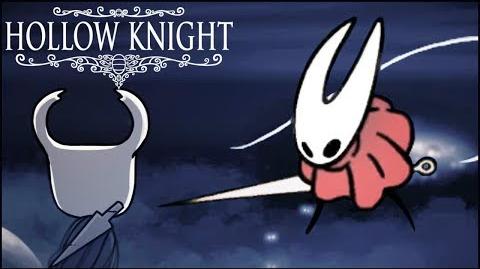 Hornet always performs a Leap when recovering from a stagger.

Dashing over her as she Lunges is typically a safe move, and using the Desolate Dive/Descending Dark Spell prevents the Knight from taking damage while it is being cast.

Vengeful Spirit/Shade Soul is very potent in this fight, as it can hit from a distance, does sizeable damage, and can also be used to clear away Spikes. This is especially effective with the increased Spirit size and damage provided by the Shaman Stone Charm. It can also push back Hornet, keeping her from hitting the Knight with her Lunge attack.

Hornet's Spikes can be Nail-bounced on.

Having the Quick Focus and/or Soul Catcher/Soul Eater Charms is useful as it allows for more opportunities to heal and/or charge SOUL, respectively.

Using the Great Slash or Dash Slash Nail Art is effective due to the fact that Hornet rarely stays in one place long enough to get more than one or two standard Nail strikes in. However, these must be timed well, as using a Nail Art leaves the Knight stationary for a short time, during which Hornet may perform her next attack.

One strategy is to use the Quick Slash, Lifeblood Heart, Grubsong, and Stalwart Shell Charms, and then repeatedly attack Hornet while tanking her attacks and Focusing to heal whenever she staggers. Stalwart Shell and Lifeblood Heart are not necessary if the Knight has at least 7 Masks and the Coiled Nail.

Hornet Sentinel can be fought in the Kingdom's Edge.

Hornet after being defeated 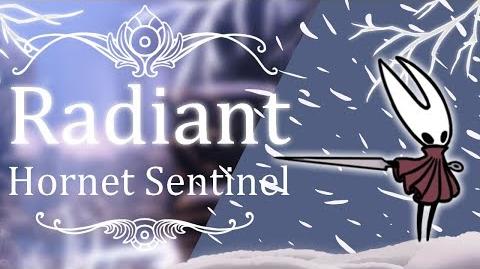