Health is represented as Masks, shown in the upper-left corner of the screen. Hornet starts the game with 5 Masks and can obtain more. Health is lost by taking damage, either from enemies or from environmental hazards. Health can be regained by the use of the Bind ability consuming a full Silk spool.

The Needle is Hornet's main weapon. Not only can she use it to slash or block attacks against enemies, but also to dash forward, stab, and bounce up above them. She can also use it alongside her abilities to deal greater damage or as a grappling hook.

Tools are special items classed by categories, equipped on a Crest with limited slots. They can be used as throwing weapons or defensive aids without costing Silk. Crests and Tools can be changed when sitting on a Bench similar to Charms.

Abilities consume Silk thread to use them.

Hornet can collect and keep various items throughout her journey, which are stored in her inventory. They can be related to specific quests. 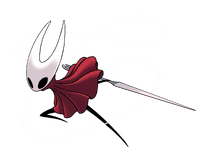