Hornet is the mysterious princess-protector of Hallownest’s ruins, a major character in Hollow Knight and the protagonist of Hollow Knight: Silksong. She wields a needle and thread with deadly prowess.[3] As a boss, Hornet appears in two forms, Hornet Protector in Greenpath and Hornet Sentinel in Kingdom's Edge. She must be defeated twice to unlock her Journal entry, but this can be either by defeating both forms or by defeating her Protector form once in Greenpath and once in

Hornet is the daughter of the Pale King and Herrah the Beast, the queen of Deepnest. Her birth was the result of a bargain for her mother to become a Dreamer, and as such, she spent only a short time with Herrah.[4][5] Her shared father with the Knight and the rest of the Vessels makes them siblings.[6][7]

Raised in Deepnest,[8] Hornet survived the Infection and the fall of the kingdom. She wanders its ruins, chasing off travellers who would seek to desecrate them, but also protecting the sealing of the Black Egg. She also guards the Cast-Off Shell in the Kingdom's Edge which can grant the King's Brand, the key to the Abyss.[9] In her duties, she encountered Quirrel in the Howling Cliffs at his arrival in Hallownest. She attempted to fight him but was repelled by the mask of Monomon he wears on his head. Hornet leaves him be after recognizing the mask, knowing that he was called upon, despite him not knowing it.[10]

Hornet appears at first as a wandering and recurring antagonist to the Knight. As their journey progresses, her involvement influences their quest in Hallownest.

Hornet is first encountered at the entrance to Greenpath, where she observes the Knight before moving away. She is quickly seen two more times dashing away from them throughout the overgrown Pilgrim's Way. The Knight finally catches up with her at the standing stones marking the entrance to the Lake of Unn, standing by the body of another Vessel. Relating the Knight's quest to the awakening of the Infection, she denies them to pursue any further. They clash, and when defeated, Hornet flees without a word.

Hornet reappears briefly before the end of the Pilgrim's Way in the Fungal Wastes, going in the direction of the City of Tears. She, later on, catches up with the Knight at the Fountain Square in the middle of the drenched capital. Finally understanding the truth behind their origin and their quest, she encourages them to learn of Hallownest's sacrifice. She then asks them before leaving to find her at the Cast-Off Shell if, knowing the truth, the Knight would still want to take part in Hallownest's perpetuation. This encounter does not occur if the Knight meets her first at Kingdom's Edge before entering the Fountain Square.

At Kingdom's Edge, Hornet wishes to test the Knight's resolve in one more battle before entrusting them with Hallownest's future. Upon her defeat at the top of her strength, she allows the Knight to have the King's Brand burned onto their shell. She believes they would still continue their quest even after learning the truth of their conception at the bottom of the Abyss. Her trust compels her to save the Knight caught in the collapse of the Cast-Off Shell, trapped under piles of white ash. She leaves again without saying a word after saving them.

If the Knight defeated Hornet at Kingdom's Edge before facing Herrah the Beast in Deepnest, Hornet appears next to them as they regain consciousness. Unlike her other appearances, she allows herself a respite to mourn the passing of her mother. She also expresses regrets that in order to repay her debt to her mother and perpetuate Hallownest, she had to let the Knight end her existence.

Hornet also appears at the top of the Abyss after the Knight successfully acquires the Shade Cloak and safely returns. She now believes that since the Knight ascended the Abyss unscathed, they have a choice in their journey: to prolong Hallownest's stasis, or to face the heart of the Infection instead.

After the Knight acquires the Void Heart and faces all three Dreamers, Hornet waits for them at the Temple of the Black Egg in the Forgotten Crossroads. She is impressed by their feat of both breaking the seals and accepting the Void within themself, casting them as an exceptional being. Once the Black Egg is opened, she tells the Knight she cannot follow them inside as the egg, built to sustain Vessels, would drain her were she to join. She, however, promises to aid as best as she can if the moment presents itself.

She fulfils her promise once the Hollow Knight has been nearly defeated. She breaks open their shell with her needle, allowing the Knight a way to use the Dream Nail on their sibling and reach the heart of the Infection.

Hornet can be fought in both her forms in the Pantheons of Godhome. Like a few other beings partaking in the ritual of the Godseeker, she is conscious of her mind being invaded and her dream battle shared with the Knight.

Hornet's fate depends on the Knight's actions. If the Knight never acquires the Void Heart and seals the Radiance by themself, she does not get involved at the end of their journey. If they continue to fight the Hollow Knight or fail to enter their mind despite her aid, Hornet is knocked unconscious and sealed within the Black Egg along with her sibling.

If the Knight successfully enters the mind of the Hollow Knight and defeats the Radiance, the Black Egg disappears, leaving behind Hornet and her needle, along with the cracked shell of her sibling.

Alternatively, if the Knight completes instead the ritual of the Godseeker and defeats the Absolute Radiance, she witnesses the disappearance of the Infection's tendrils outside the Black Egg. Startled by the sudden appearance of the Hollow Knight coming out of their prison, she readies herself for battle.

Hornet can be found in several locations across Hallownest. However, she may not appear in some due to events within the game.

Hornet before her boss battle in Greenpath

Hornet in Fountain Square in the City of Tears

Hornet in the Abyss

Hornet outside of the Black Egg 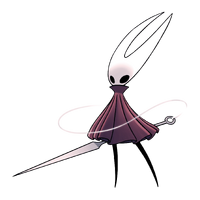 "Quick with her deadly needle, relentless in battle, Hornet is exploring Hallownest to find the answer to a riddle that has plagued her. She has so far resisted the infection, but will still cut you down if you stand in her path."

"You may catch glimpses of Hornet during your exploration of Hallownest, although she always seems to be one or two steps ahead of you. If you do manage to catch up with her, be wary! Her needle can cut a bug down from thirty yards."[11]