The Hollow Knight Kickstarter campaign was a crowd-funding project that ran from 19 November 2014 until 19 December 2014.[1][2] In this month, a total of $58,893 AUD was raised to fund the development of Hollow Knight.[2] It is no longer possible to donate any money to this campaign.[3]

Backers could donate a certain amount of money which granted them rewards depending on how much they donated.

In addition to the ability to design NPCs for the game, backers were also given the opportunity to provide voices for their characters:

"The characters in Hollow Knight will speak in little snippets of an insecty, gibberish language that accompanies text boxes. Some examples can be found here."

It is not confirmed whether any of the backers actually voiced a character in the finished game.

Content that was revealed on the main Kickstarter page and subsequent updates during the Kickstarter campaign.

Promotional art for the tier-4 reward: "Get a beta copy of the game"

Promotional art for the tier-6 reward: "Become a Ghost in the Glade of Hope" 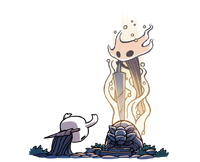 Promotional art for the tier-7 reward: "Become a Warrior Spirit in the Queen’s Glade"

Example sketch of the tier-8 reward: "Design a character for the game"

Example sketch of the tier-9 reward: "Design a boss for the game"

Example sketch of the tier-10 reward: "Design a dungeon and boss"