Hollow Knight: Silksong is the sequel to Hollow Knight featuring Hornet as the playable character. It is being developed by Team Cherry for Windows, macOS and Linux, with a port to Nintendo Switch by Shark Jump Studios planned for the release as well.

"Discover a whole new kingdom! Explore coral forests, mossy grottos, gilded cities and misted moors as you ascend to the shining citadel at the top of the world."

"Engage in lethal acrobatic action! Wield a whole new suite of nimble moves as you dance between foes in deadly, beautiful combat."

"Craft powerful tools! Master an ever-expanding arsenal of weapons, traps, and mechanisms to confound your enemies and explore new heights."

"Solve shocking quests! Hunt down rare beasts, unearth ancient mysteries and search for lost treasures to fulfil the wishes of the downtrodden and restore the kingdom’s hope. Prepare for the unexpected!"

"Face over 150 all-new foes! Beasts and hunters, assassins and kings, monsters and knights - you must defeat them all with bravery and skill!"

"Challenge Silk Soul mode! Once you conquer the game, test your skills in an all-new mode that spins the game into a unique, challenging experience."[1]

Featured in the new kingdom of Pharloom are:

Hollow Knight: Silksong was first planned as additional content to Hollow Knight, as part of a Kickstarter goal to have a second playable character.[5] Eventually, the development became too ambitious for a DLC, so the developers opted for a new game. It was revealed on February 14th, 2019.[6] The game is also planned to incorporate the remaining Kickstarter backer creations such as characters, bosses and areas. 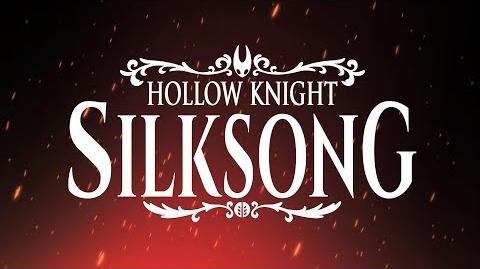 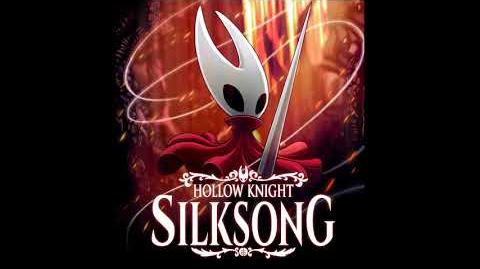 Initial teaser after meeting the stretch goal from 2014

Second teaser image leading up to the first look announcement on Feb 14, 2019.

A large 'Automaton' in the Forest of Bones

A Giant creature that is seen possibly used as fast travel