The Hollow Knight is one of the main bosses in Hollow Knight. They are central to the Knight's journey and the story of Hallownest. The

The Hollow Knight is the Vessel chosen by the Pale King to seal away the Radiance and save Hallownest from the Infection.[2] Like their siblings, they are the child of the King and Queen of Hallownest, birthed in the Abyss to be infused with the power of the Void.[3] As such, they are genderless.[1][4] This birth condition was also supposed to leave them without a mind, will, and voice,[5] to prevent the Radiance from influencing them.[6][7] However, their purity was misjudged, tarnished by an idea instilled,[8] a bond with the Pale King who raised them.[9]

Regardless of their impurity, the Hollow Knight was trained and raised, eventually becoming a fully grown Vessel.[10] The Radiance was sealed within them, and they were chained within the Temple of the Black Egg where they were expected to contain the Infection for eternity.[11] However, because of the aforementioned impurities, the Radiance could still exert influence. It ultimately resulted in the resurgence of the Infection and the Kingdom falling into ruin.

Over time, the Hollow Knight disappeared from the fallen Kingdom's memory. Only the Memorial in the middle of the City of Tears testifies of their sacrifice to save Hallownest.

After some time, the Radiance's power broke out of the Hollow Knight, cracking their shell and fully Infecting them.[12] This event was the catalyst that brought the Knight back to Hallownest.[13] The Knight can free and fight the Hollow Knight after killing the three Dreamers who sealed the Black Egg's entrance.

After the Knight defeats Absolute Radiance at the peak of the Pantheon of Hallownest, the Infection vanishes from Hallownest. The Hollow Knight can then be seen walking out of the Black Egg, freed from the Infection. They are met outside by a startled Hornet.

The Hollow Knight emits a roar at the beginning of the fight, and at the start of each Phase of the fight.

These are the base attacks that the Hollow Knight starts with. They are expanded on in the next 2 Phases.

After reaching 400 HP, the Hollow Knight gains these attacks in addition to the attacks from the previous Phases. However, they lose the Lunge and Triple Slash attacks. The Hollow Knight attacks and moves less frequently and cannot be staggered after this Phase starts.

After reaching 0 HP, the Hollow Knight heals for 250 HP only if the fight is continued. Depending on the Knight's progress, the fight is interrupted by Hornet, allowing the Knight to access their mind with the Dream Nail and fight the Radiance, otherwise, the fight continues as normal.

During the fourth Phase of the battle, the Hollow Knight loses all other attacks except the Bouncing Balloon and Self Stab attacks and gains one new attack. 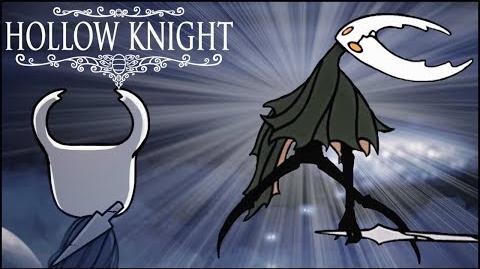 Upon breaking the seals on the Temple of the Black Egg by destroying the three Dreamers, the Knight is allowed entrance in order to fight this boss. To begin the fight, the Knight must break the four chains holding the Hollow Knight.

The Hollow Knight fight has 4 Phases. Each Phase is marked by the Hollow Knight standing still, turning their head skyward and roaring. This roar stuns the Knight. The fight changes with each Phase.

In Phase 1, the Hollow Knight has three attacks: Triple Slash, Lunge, and Parry. The attacks come regularly. The Hollow Knight back dashes, teleports, and leaps around the arena between attacks.

In Phase 4, the Hollow Knight can barely move. They can no longer teleport or leap and can hardly swing their nail. Only two attacks are used in the phase: the Bouncing Balloon and Deterioration.

The main weakness of the Hollow Knight is that they are vulnerable to attacks from above. During a Lunge or Triple Slash, jump above their head and Nail-bounce a few times while they finish the attack. If they parry your attack, shadow dash through their riposte.

There are safe zones amongst the blobs during the Barrage and Explosion atacks so pay attention and move into safe zones. Dashing can often overshoot a safe zone, so walking is usually the safer option.

During the Bouncing Balloon attack, the Hollow Knight attempts to home in on the Knight. They have trouble tracking if the Knight constantly changes direction. Dodge the first slam, then dash under them when they rise for a new slam, then reverse again after they come down and repeat.

During the Diving Flame Pillar attack, the pillars briefly charge on the floor before erupting, showing where it is safe to stand. When the Hollow Knight jumps and readies their nail, start looking for a safe zone immediately after dodging the downward strike.

The Hollow Knight's teleport usually positions them far away from the Knight, so using Vengeful Spirit/Shade Soul during this time is useful to get hits in before they charge another attack. Moving too far from the Hollow Knight makes it more likely they will teleport close to the Knight, so be careful when running away to heal.

Under normal circumstances, the Hollow Knight is immune to the Dream Nail and does not grant any SOUL on a successful hit.

Depending on the Knight's progress, one of two endings plays out after the fight. After the ending, the Knight respawns at the last Bench they rested at. The Hollow Knight can be Dream Nailed at the start of Phase 4 if the Knight has Void Heart, initiating the fight with the Radiance.

The Hollow Knight is located in the Temple of the Black Egg which can be opened after all three Dreamers have been killed.

The young Hollow Knight in the Path of Pain scene

The young Hollow Knight in the Pantheon of the Knight scene

Arena where the Hollow Knight is fought

Memorial fountain in the City of Tears

Soul Totem in the Path of Pain depicting the Hollow Knight