Hive Knight is an optional boss in Hollow Knight, introduced in Lifeblood. Defeating him grants a new Charm, Hiveblood.

Hive Knight is the most valiant and skilled knight of the Hive;[1] he is flightless and bound to protect Hive Queen Vespa by the Bees' hive mind.[2] Although the Infection spread to the Hive after the queen died,[3] Hive Knight still protects her, hoping she will one day wake up and revive the Hive.[4]

Hive Knight can be fought in the furthest room in the Hive where the giant lifeless body of the queen lies. He ambushes the Knight as they enter the place and battles them ferociously. Upon defeat, Hive Knight kneels in front of his queen before collapsing on the floor.

Defeating Hive Knight allows the Knight to acquire the Hiveblood Charm. After taking it, the spirit of Queen Vespa appears next to his corpse; she is content that he was finally freed from his binding to the Hive.[5]

Hive Knight has a variety of attacks and manoeuvres:

It is highly recommended to obtain Shade Cloak before the fight, as this makes it possible to dash through Hive Knight's Surprise Slash and Lunge attacks and makes handling the Swarm Release attack safer. And with that, Sharp Shadow can be a useful Charm against Hive Knight.

Quick Focus makes it safer to heal. There are plenty of no-Charm healing opportunities too: when out of range of a Surprise Slash or Lunge attack, also if dodged early; during Honey Spikes (when in a safe location); at the beginning of Swarm Release; and during Hive Knight's stagger.

The Cyclone Slash Nail Art is very strong against Hive Knight due to the Knight being able to move horizontally while repeatedly pressing the attack button.

Hive Knight can be found in the eastern part of the Hive.

Location in the Hive

Arena in the Hive 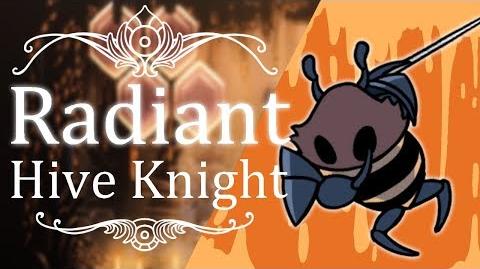