Troupe Master Grimm is both a quest NPC and boss introduced by the Grimm Troupe in Hollow Knight. He is the main character behind his quest. Nightmare King Grimm is his Dream form.

Grimm is the master of the Grimm Troupe, a mysterious travelling circus. In truth, Grimm and his Troupe travel from the Nightmare Realm to wherever the Nightmare Lantern has been lit by acolytes.[2] They gather Nightmare Flames from ruined lands to fuel the sinister being enslaving the Troupe, the Nightmare's Heart.[3]

Their ritual to feed the Nightmare's Heart consists of feeding first a Grimmchild with Nightmare Flames. They then slay the Nightmare King for it to be reborn anew through the Grimmchild.[4]

Grimm and his Troupe set up tents in Dirtmouth as soon as the Knight has lit the Nightmare Lantern. Inside the main building, Grimm appears to them in a show of red light and smoke. The Troupe Master is aware that the Knight called them with the Lantern and offers them the choice to participate in their Ritual.[5] He then gives them the Grimmchild and entrusts them to collect the Nightmare Flames gathered by his Grimmkins throughout Hallownest.

With each set of three Flames gathered, Grimm has the Grimmchild consume them to grow. After the second set, the Troupe Master tests the Knight's strength in a fiery, theatrical battle, in preparation for their confrontation with the Nightmare King. He also rewards them with a Charm Notch.

After collecting the third set of Flames, Grimm can be found sleeping in his quarters. As such, he is ready for the Knight to use the Dream Nail on him and enter the Nightmare Realm. If they successfully slay the Nightmare King, the Ritual is completed, and the Troupe leaves Hallownest before the Knight wakes up. The Troupe also disappears if the Knight helps Brumm banish them instead of facing the King.

Grimm can be summoned to

Grimm bows to the Knight before the battle. If the Knight hits him while bowing, Grimm screeches at the Knight and counterattacks with the Pufferfish Attack.

Because Grimm moves by way of teleportation and rarely stays in one place for long, from an offensive perspective, it is important to deal as much damage to Grimm in the shortest time possible.

Each Spell has its use against Grimm. Vengeful Spirit/Shade Soul is useful during the Cloak Spikes, Pufferfish, and Fire Bats attacks. Desolate Dive/Descending Dark is a great way to dodge the Dive Dash attack. It is best to use it almost as soon as the Knight sees Grimm preparing the Dive Dash Attack so that Grimm lands in the middle of it. Howling Wraiths/Abyss Shriek can be useful during the Pufferfish attack, right before the fireballs start to spawn, and during the Cloak Spikes attack since Grimm is taller than the Knight.

Use the Shade Cloak to dash through both of his Dash attacks (Dive Dash and Dash Uppercut). The Knight can also damage Grimm this way if they have the Sharp Shadow Charm.

Standing directly next to where Grimm explodes into fire when he uses Dash Uppercut is a good way to avoid all 5 projectiles as they spread in a cone pattern, this also gives healing opportunity especially with the Quick Focus Charm.

The Knight can use the time during the Cloak Spikes attack to heal. This is easier to do with Quick Focus.

The Shape of Unn Charm is a fantastic way to heal against Grimm. It lowers the Knight's hitbox so the Knight can heal safely during a Fire Bats Attack. If combined with Quick Focus, the Knight can run and heal from Grimm during a Dash Uppercut attack too. It can also be used to heal and position at the same time during the Cloak Spikes attack.

If the Knight stays near the right or left side of the screen and slightly jumps, they can mostly avoid the flames during Grimm's Pufferfish attack.

Double jumping and dashing over the Fire Bats attacks puts the Knight in range to attack Grimm.

With enough health, it is possible to quickly take down Grimm's health by tanking hits during the Pufferfish attack while repeatedly using the Abyss Shriek Spell and having the Shaman Stone Charm equipped. Grubsong is a very useful Charm here, as each time the Knight takes damage they gain some SOUL to use for more Shrieks. This is especially effective in combination with Grubberfly's Elegy as it increases the SOUL gained. Keep in mind that without enough SOUL to fully deplete Grimm's health, he may perform multiple Pufferfish attacks in a row, giving the Knight very little time to attack or heal in between.

Grimm is located in Dirtmouth after he has been summoned by the Nightmare Lantern in the Howling Cliffs.

Grimm taking in the Grimmchild before his fight

Grimm sleeping in the eastern part of his tent 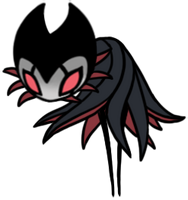 Grimm bowing to the Knight 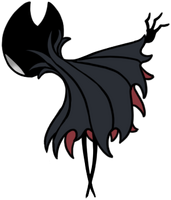 Grimm bowing to the Godseeker