View source
watch 02:30
Dead Cells Final DLC - The Loop
Do you like this video?
Play Sound

Gods And Glory (Part B)

Grey Prince Zote is a hidden boss in Hollow Knight. He is the stronger Dream variant of Zote the Mighty, fueled by Bretta's delusions of him.

He grants 300 Essence on the first victory and none after each subsequent victory.

There are some safe times to heal, particularly when Grey Prince Zote is staggered or during the Zoteling and Summon attacks (depending on how close Grey Prince Zote is for the attacks). However, healing is not a great tactic past Grey Prince Zote 8 because healing 6+ damage requires a lot of time and/or many opportunities to heal. Charms like Quick Focus, Deep Focus, and Shape of Unn can be most helpful.

It is important to defeat Grey Prince Zote as quickly as possible because the longer the fight draws on, the more difficult it can become to evade all of his attacks. For damage output, Nail-based Charms work very well; Fragile Strength/

Unbreakable Strength, Quick Slash, and Mark of Pride/Longnail are helpful.

Spells are a valid strategy too. Desolate Dive/Descending Dark is a great Spell for its damage and invincibility frames. Vengeful Spirit/Shade Soul is also useful, especially for damaging Grey Prince Zote and his Zotelings at the same time. It is recommended to have Shade Soul and Descending Dark for this fight. To maximize Spell efficiency and damage, bring the Spell Twister and Shaman Stone Charms, respectively. A lot of damage can be dealt to Grey Prince Zote when he spits out Zotelings during the Zoteling attack, when he summons Volatile Zotelings during the Summon attack, and during the Flail attack.

The Shade Cloak is very useful for dodging a lot of Grey Prince Zote's (and his Zotelings') attacks. The Monarch Wings are useful for avoiding the shockwaves and navigating the sometimes crowded airspace of the arena.

A challenging but viable tactic is to combine Grubberfly's Elegy, Quick Slash, Fragile/

Unbreakable Strength, and Fury of the Fallen to maximize Nail damage and range even at 1 Mask.

As with the other Dream Bosses, the Knight does not die when they lose all their health during this battle, but simply wakes up next to the statue. This means that Fragile Strength and Fragile Heart can be used continually without breaking. 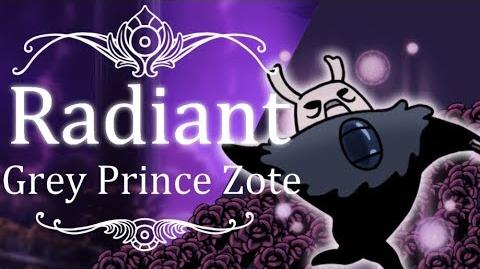