(Phase One) Gods & Glory part A

Great Nailsage Sly is a quest boss in Hollow Knight introduced in Godmaster. He sits at the top of the Pantheon of the Sage in Godhome.

Great Nailsage Sly is the final boss of the Pantheon of the Sage, the third of five Pantheons. He is significantly more agile than most of the other bosses in the game. His nail's natural range is equivalent to the combination of the Longnail and Mark of Pride Charms.

There is time to attack Sly in between his attacks but that time varies from 0.5 seconds to 2 seconds depending on the combination of attacks.

It is important to maintain good spacing against Sly and keep watch of the Shade Cloak cooldown as shadow dashing is exceptionally useful for surviving the fight against Sly. The Sharp Shadow Charm increases the distance of the shadow dash and allows the Knight to even safely dash through the Cyclone Slash attack. The Sprintmaster Charm allows the Knight to run safely away from many of Sly's attacks, allowing them to save shadow dashing for absolute emergencies.

The Vengeful Spirit/Shade Soul and Desolate Dive/Descending Dark Spells have the most utility against Sly. Howling Wraiths/Abyss Shriek is very useful in his Cyclone Slash attack, as the Knight can get one Nail hit before he releases it then quickly use Howling Wraiths/Abyss Shriek up to 3 times (4 with the Spell Twister Charm), this deals enough damage to almost finish the first Phase.

Healing without Charms is safest when Sly is staggered and during the transition from Phase 1 to Phase 2. However, the Knight can heal without Charms if they are quickly safe from the third attack of the Slash Combo or just out of range of the Nail Slam (prompting the follow-up attack). The Quick Focus Charm makes those moments safer for healing and increases the Knight's healing capability during a stagger or Phase transition from 2 Masks to 3. To further increase safe healing opportunities, combine the Shape of Unn Charm with Quick Focus. In all cases, it is best to start healing as soon it is safe to do so.

For the Frenzy attack, the most consistent tactic is to stay near the middle of the arena and wait for Sly to slow down. Once he slows down, the spin happens quickly so get out of his nail's range and turn around to strike him either with the Nail or a Shade Soul (there are other useful options, including Sharp Shadow). Repeat this process until Sly is defeated. 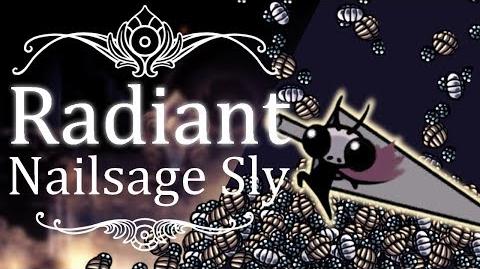