God Tamer is a boss in Hollow Knight. She sits at the top of the Trial of the Fool.

God Tamer is a veteran warrior of the Colosseum of Fools, taking the mantle of boss of the last and most brutal trial.[1] She compensates for her small stature with the strength of her tamed Beast, alongside which she fights.[1] They both present signs of the Infection.

God Tamer is confronted at the end of the Trial of the Fool after all other gladiators and foes have been vanquished. She abandons the fight if her Beast is defeated before her. On the other hand, the Beast continues fighting even if she is defeated first.

Upon defeat, the Infection within the Beast bursts out, making it explode. While the Beast dies at the end of the fight, God Tamer herself remains alive and collapses on the ground no matter who is defeated first.[2]

God Tamer has the following attack:

The Beast has the following attacks: 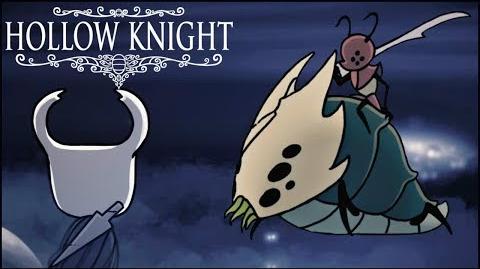 Be warned that there are no checkpoints in the Colosseum, so if the Knight loses to God Tamer, they have to start the Trial of the Fool from the beginning. This boss is also found in the

Pantheon of the Sage, without having to defeat her in the Trial first.

There is plenty of time to heal before God Tamer enters the arena. Both God Tamer and her Beast have relatively little health by boss standards, making them susceptible to damage-bursting them both down, especially with the Stalwart Shell Charm equipped.

The Vengeful Spirit/Shade Soul Spell is useful in this fight because it can hit both the Beast and God Tamer with a single cast. If the Beast is using its Roll attack, a single, well-timed cast of the Spell can hit as many as five times by moving with the Beast. The Spell is also able to keep God Tamer away when dealing with the Beast.

Equipping the Weaversong Charm can make the fight trivial. Simply sticking to one of the walls of the arena using the charge of Crystal Heart keeps the Knight completely safe while the weavers slowly kill the two enemies.

The Shade Cloak helps immensely with dodging God Tamer and the Beast.

Even once the Beast is defeated, God Tamer may make one more Leap attack but stops fighting shortly after.

Defeating God Tamer in the Trial of the Fool is not required to unlock the Pantheon of the Sage. To have her statue appear in the Hall of Gods, she needs to be defeated in the Colosseum of Fools or just encountered in a Pantheon.

This boss is only found in the Colosseum of Fools and

God Tamer riding on her beast

Tamer giving up after her beast dies

Arena in the Colosseum of Fools