The Five Great Knights of Hallownest once stood beneath the throne as the kingdom's protectors.[1] They are revered figures who are often mentioned in historical records but only as a group. Information on the individual Great Knights is sparse, with Relic Seeker Lemm noting that their names and appearance seem to have been erased from history.[2]

The Five Great Knights are:

By the time the Knight returns to Hallownest, three of the Great Knights have either died or disappeared. Only Ogrim and Ze'mer are known to be alive.

The Great Knights are depicted in Ogrim's cave below his boss arena as statues made of dung: 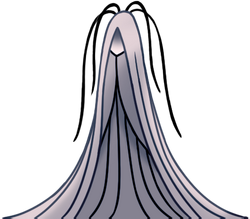 Located in the Resting Grounds where she is known as the "Grey Mourner", Ze'mer is the only remaining Great Knight besides Ogrim. Sheo refers to her as "Mysterious Ze'mer". She is not native to Hallownest, originating from "lands serene", a location from which she also brought Delicate Flowers.[3] There is not much known about Ze'mer when she was a Great Knight, but Ogrim remarks on how she told stories.[4]

After her Mantis lover died,[5] Ze'mer turned to mourning and retreated to her house in the Resting Grounds.[6] She dissipates after the Knight delivers the Delicate Flower to the grave of her lover.

Dryya had a hard front, and Nailmaster Sheo refers to her as "Fierce Dryya", although she is noted to have been a caring type.[7][8] Ogrim mentions that he misses her wisdom.[9] She was tasked with standing guard over the White Lady in the Queen's Gardens.[7]

After defeating numerous Mantis Traitors, evidenced by the pile of their corpses aside Dryya's own, they eventually overwhelmed her. The White Lady is not aware of Dryya's death.[7]

Referred to as "Kindly Isma" by Nailmaster Sheo, there is little known about Isma, but her strength seemed to surpass that of Ogrim's, and her nature seemed to be kind and understanding.[8][10] Ogrim and Isma had a very close relationship, even more so since he seems to be protecting her grove specifically.[11][12] Isma’s powers and capabilities are not specifically stated but seem to have some relation to acid, as her tear or "blessing" grants acid immunity.

She can be found within the Royal Waterways, in Isma’s Grove. She appears to be dead and her body can be seen attached to a wall by plant growth; making the cause of her death the most questionable.

Hegemol is the only Great Knight whose whereabouts are largely unknown. He was the favourite Great Knight of Nailmaster Sheo, who calls him "Mighty Hegemol".[8] He was a towering figure but soft spoken, which was surprising for somebody of his stature.[8] Ogrim mentions that he misses Hegemol's humour.[13]

A statue of Hegemol can be found outside the City of Tears, requiring the City Crest to open the gate to the city.[14]

While Hegemol was sleeping, his armoured shell was stolen by a Maggot who wanted to defend his siblings. It is unknown whether Hegemol is alive after this or if he was murdered by the maggot.[15][16] While the False Knight who stole his shell wields a mace with an armoured bug attached to the end, Hegemol himself is always shown without any weapon.

The most loyal of the Five Great Knights,[17] Ogrim is found in the Royal Waterways where he is known as "Dung Defender". He hopes to meet the other Great Knights again and see Hallownest be reborn.[18] Although he misses Isma in particular, he is not able to visit her grove due to his duties and an oath that he swore.[11][19] Due to this, he seems to be unaware of Isma's fate and the fate of the other Great Knights.

When he is defeated five times in his dreams as

White Defender, Ogrim wonders if the line of Hallownest's Great Knights ends with him or whether it can be passed on, mentioning that he can easily imagine the Knight standing amongst the greatest heroes of the age.[20] Ogrim disappears after this encounter, leaving behind a statue of the Knight made of dung.

Dung statues of the Five Great Knights made by Ogrim

Dryya's corpse in the Queen's Gardens

Statue of Hegemol outside the City of Tears

Ogrim in the past

Ogrim in his cave

"One of Hallownest's five greatest Knights and defender of the Queen’s Glade. She was driven mad by her Queen lost and the garden overrun. Still she retains her honour, offering fair challenge to the Hollow Knight: Nail against nail. A duel to the death."[21] 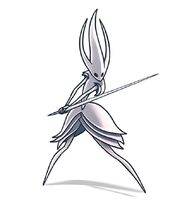 "Deep in the Waterways beneath the City of Tears lurks a shunned being. Once a knight, now lost to puerile obsession: The Dung Defender. Despite his exile, the Dung Defender has for centuries maintained a self-conferred charge: the protection of his mysterious gleaming 'beloved.' Stalwart and full of bravado, the Dung defender eagerly challenges all who would enter his noxious realm."[22]