False Knight is one of the main bosses in Hollow Knight. He keeps the City Crest required to open the gates to the City of Tears. Failed Champion is his faster and stronger dream form.

False Knight is a Maggot wearing the armour of Hegemol, one of the Five Great Knights of Hallownest.[3][4][5] This weak creature wanted to find means to protect his siblings who live in an abandoned storeroom in the middle of the Forgotten Crossroads.[6] When he discovered Hegemol sleeping in his armoured shell, he took it for himself, hoping for the great strength that wearing the armour seemed to promise.[7] Even though madness did not drive him to do this, False Knight eventually fell to the Infection's control.[7][3]

False Knight falls from the ceiling when the Knight enters the hall below the Maggots' storeroom, killing any enemies still wandering inside. He then attacks the Knight, deluded by his own strength, while threatening to collapse the building in his rage.[8]

At the end of the fight, False Knight accidentally collapses the floor and falls below, where the Knight can execute the final blow. Once defeated, the Maggot is expelled from the armour along with the City Crest. The shelled bug that served as the head of the mace then crawls away slowly.

When returning to the storeroom, the Maggot's corpse can be found lying on an upper level hidden by a breakable wall. His brethren are mourning him, and flee at the Knight's approach. Using the Dream Nail on the corpse brings the Knight to a dream projection of the storeroom where Failed Champion, a much stronger form of False Knight, can be fought.

After this second defeat, False Knight's spirit appears, floating above his corpse, to tell the Knight the reasons behind his acts. He then shatters into 300 Essence that is absorbed by the Dream Nail. 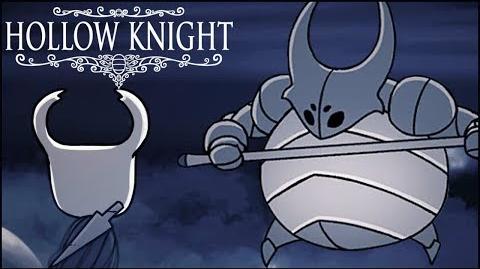 When False Knight Staggers and the Maggot pops out, heal if necessary then get in as much damage as possible. This is the only time the Knight gains SOUL from attacking False Knight.

It is important to note that attacking the armour does not award SOUL, so the Knight should conserve their SOUL if they need to heal or use the Grubsong Charm to regain SOUL when struck.

If healing is needed, the safest opportunity is to wait until False Knight goes into a Rage and then heal up in a corner of the room. Watch for falling barrels.

While the falling barrels deal no damage when they hit the armour from above, the Knight can hit the barrels to redirect them. Causing them to fly into False Knight when angled properly and dealing 10 damage each. This is a great way of harming him during the Rage attack if healing is not necessary. Hitting these falling barrels into False Knight can also cause him to Stagger.

After exposing the Maggot's head three times, False Knight performs one more Rage attack before breaking the floor, falling to the level below and revealing the Maggot. Drop down and attack the Maggot to end the fight.

After the first time False Knight Rages, a segment of the wall above the left gate becomes breakable, granting the Knight the chance to flee the battle if they so choose. This is useful as the Knight obtains the Vengeful Spirit Spell in the room immediately after the False Knight room, allowing them to either attempt the fight again with a stronger, ranged attack or simply proceed through the rest of the game and come back later. Returning to the area after escaping resets the fight.

After defeating False Knight (or Failed Champion), the Knight can still strike his armour with the Dream Nail, yielding dialogue and SOUL like usual. This is particularly useful when challenging the

Pantheons that contain him in

Godhome, as it allows the Knight to accumulate additional SOUL for the subsequent battles.

Besides defeating him, False Knight is unlocked in the Pantheon of the Master and the Hall of Gods if he was skipped by breaking the left wall during his fight and leaving the room.

False Knight is located in the centre of the Forgotten Crossroads.

Arena in the Forgotten Crossroads 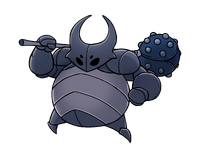