Failed Champion is a hidden boss in Hollow Knight. It is the Dream variant of the False Knight, faster and tougher than its physical counterpart.

Failed Champion's behaviour is very similar to False Knight's, but his attack rate and speed have been increased immensely. Contact damage and physical attacks now deal two Masks of damage, while shockwaves and falling barrels still deal one Mask. In addition, the following attacks have had tweaks: 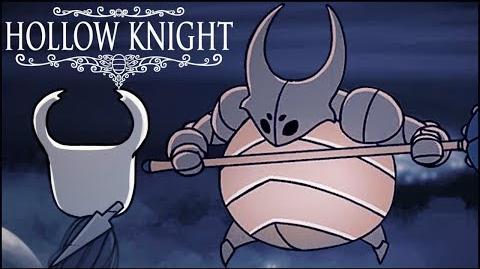 Since Failed Champion does not give SOUL it is advised to keep the Maggots near his body alive as to Dream Nail them for SOUL to start the fight with. (This tactic does not work in

Godhome.) However, if the Knight has both the

Weaversong and Grubsong Charms equipped, they can instead use the Weaverlings to harvest SOUL from False Knight's suit of armor.

Failed Champion's jumps are quick, though it is better to dash underneath him when he jumps so as not to get caught by the mace swing. This is made more effective with Shade Cloak and the Sharp Shadow Charm (for the increased Shadow Dash distance) because Failed Champion is so large.

Dreamshield Charm can sometimes block the falling barrels caused by most attacks.

It is possible to stay inside a stagger for as long as needed by hitting the armour during a stagger. This resets the stagger timer without damaging the maggot, which gives enough time for a Dream Nail hit or a Focus, especially if the Dream Wielder and Quick Focus Charms are equipped. Repeating this enough allows the Knight to fully restore their health every stagger. Note that Failed Champion's stagger should end by hurting the maggot and not by him getting up on his own, as otherwise, that stagger does not count for progressing the fight. (Please see the Pantheon of the Knight video guide for a visual example of this tactic.)

Desolate Dive/Descending Dark is a great Spell to use throughout the fight because of its invincibility frames and damage. Vengeful Spirit/Shade Soul is also useful. It is a good tactic to use Howling Wraiths/Abyss Shriek when Failed Champion leaps overhead and winds up for a Rage. All Spells are made more damaging by the Shaman Stone Charm.

The Dash Slash and Great Slash Nail Arts are good options for damaging Failed Champion in between attacks.

A very safe strategy is to sit on the left or right wall while charging Super Dash far up enough that Failed Champion cannot reach the Knight, but not far up enough that the Knight does not appear on screen (this may cause problems for the following Charm setup). This allows The Knight to avoid all contact with the boss, and instead only have to worry about the falling barrels (which only deal 1 Mask of damage). Dealing damage while sitting in the corner requires some form of a companion - the options being

Weaversong, and Glowing Womb, and also Grubsong for its synergy with Weaversong (and keeping Glowing Womb fueled with SOUL). Granted, this tactic takes a long period of time to pull off, as the companions do not deal a lot of damage. Additional Charms for this strategy can include

Dreamshield to block the barrels and Sprintmaster to increase Weaverling speed and range. Eventually though, Weaversong's spiders might stop spawning. If this happens, it is recommended to use Desolate Dive/Descending Dark since this causes Failed Champion to jump backwards, giving enough time to climb back up.

Returning to False Knight's arena shows that his body has been moved. To find Failed Champion, there is a breakable wall just above where his arena was, where two Maggots can be found mourning over False Knight's dead body. Using the Dream Nail on the body grants entrance to the Failed Champion fight.