The Eternal Ordeal is a secret challenge which can be found in the Hall of Gods in Godhome. It requires defeating as many Zotelings as possible before dying.

The Eternal Ordeal always starts with a fight against Zoteling the Mighty (who is the same as Zote the Mighty as he is fought in the Trial of the Warrior, however, he is able to deal contact damage). After defeating him, a full-screen title card appears displaying "The Eternal Ordeal", and a counter with Zote's head appears as a HUD in the lower-left of the screen to track Zoteling kills.

Zote begins to sing along with the music as waves of Zotelings begin to spawn. As the counter racks up kills, the difficulty increases and more variants appear, some exclusive to the Ordeal (the Zotelings unique to the Ordeal do not have Journal entries).

Once 57 Zotelings have been killed, the counter turns gold (as does the hidden Zote statue) and a new Menu Style is unlocked: The Eternal Ordeal. The title screen features a statue of Zote with him singing the main menu theme of the game.

The Eternal Ordeal is located inside the Hall of Gods. Unlike

Grey Prince Zote, this challenge is unlocked by default. To access it, the Knight must first navigate to the far east of the second level of the Hall of Gods and break the ceiling above the third arch from the right. (Howling Wraiths/Abyss Shriek is useful for finding and breaking the barrier, but Nail attacks can also be used to break it.)

Then, reach the hidden ledge above the arch by Super Dashing off the right wall (The Sharp Shadow Charm also works since it extends the range of Shadow Dashing) and then double-jump to grab the wall.

After entering the secret room above, a pounding noise comes from the crumbling left wall. Once this wall is broken, a statue of Zote enters the room accompanied by Zote's voice. This statue can be challenged which starts the Eternal Ordeal. Once the Knight dies in the Ordeal, they are returned to this statue.

As there are no official names given for any of the unique Zote themed enemies in this challenge, these names are unofficial and assigned for ease of function.

The maximum number of Zotelings alive at any time increases with the number of kills.

Initial room before the breakable wall is broken

Zotelings in the Eternal Ordeal

Golden counter in the Eternal Ordeal after killing 57 Zotelings

Arena of the Eternal Ordeal

"Intruder amongst the gods of Hallownest" 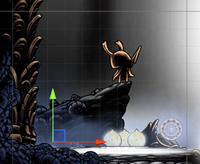