Ellina is an expanded universe character who appears only within the Hollow Knight Wanderer's Journal- acting as the fictional author of the book. Her book details her experiences within the kingdom of Hallownest and acts as an outside source providing some unique reflections, accounts, and opinions on her findings. Ellina's character beyond her time spent in Hallownest is not explored and is unknown.

A brief summary by the author of the book states the following:

"The book is written from the perspective of Ellina the Chronicler, an "outsider" who is documenting her observations as she travels through Hallownest. She only knows what she's learned from others during her journey, so she doesn't pick up on any deep lore."

In addition, Ellina herself provides a small introduction in her journal:

"It would seem you’ve happened upon my journal. This volume contains a record of my observations and musings, transcribed as I travelled into the kingdom’s depths and-through a miracle of either luck or sheer willpower-returned safely to the surface.

My travels brought me to Hallownest purely out of curiosity; though I expected to find naught but a desolate ruin down below, what awaited me was quite possibly the adventure of a lifetime.

To that end, I’ve chosen to leave my completed journal behind, in hopes that another brave explorer might use it to piece together the myriad of mysteries of this forsaken kingdom."

The contents of the Wanderer's Journal include images and descriptions drawn and written by Ellina detailing a variety of enemies, characters, and environments. The main descriptions are typed out and are accompanied by Ellina's "quotes" - which are written out in a handwriting style font. 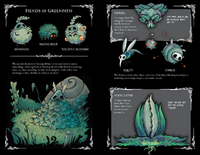 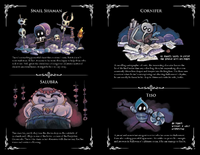 Ellina's story and adventure canonically occur at the same time as the events of Hollow Knight; the Knight's quest would have been currently in progress during the time Ellina was writing her journal. Evidence of this includes an account of Bretta first encountered by Ellina stuck in the Fungal Wastes, but later on noted to be in Dirtmouth: implying that Bretta was saved by the Knight as it occurs in the game.

Despite her story happening parallel to the game's events, Ellina never meets or runs into the Knight in person during her exploration of Hallownest. The closest instance Ellina comes to encountering the Knight underground is only through noticing the painting of the Knight by Nailmaster Sheo.

However, at the very end of the novel, when Ellina plans to leave the kingdom, she does catch a glimpse of the Knight as she's returning to the surface.