The Dung Defender is one of the main bosses in Hollow Knight. This champion of the past defends the access to Isma's Grove. The

White Defender is his dream variant.

The Dung Defender used to be known as Ogrim, the most loyal of the Five Great Knights of Hallownest.[3] As such, he participated in many battles and adventures.[4] He was also equally renowned for his bad scent, although that did not keep him from enjoying the company of the White Lady and his fellow knights.[5] He was particularly fond of the knight Isma.[6]

Ogrim survived the Infection but isolated himself in a part of the Royal Waterways where refuse gathers. There, as the Dung Defender, he guards the pump control that allows entry to Isma's Grove on the other side of the sewers. The Dung Defender defies any who would enter the place to challenge him.[7] He also passes time by rolling dung around and moulding statues out of it.

The Dung Defender seems unaware of the fate of his king and the other knights. In his isolation, he deludes himself into thinking they will return and that Hallownest can be reborn.[8]

The Dung Defender can first be heard at the entrance of his dirty domain. He mistakes the Knight for a mindless husk and attacks them. Once defeated, he leaves behind his Defender's Crest Charm before burying underground in the background.

When returning to his area after sitting on a Bench, the Dung Defender pops his head out of the ground to greet the Knight. He apologizes for attacking them and remarks on how they have proven their honour in battle.[9] He notices when the Knight has acquired Isma's Tear and explains that he is unable to visit his fellow knight's grove due to his oath and duties.[10]

Using the Desolate Dive/Descending Dark Spell on the ground below the pump's lever reveals a hidden cave where the Dung Defender rests. There, he moulded dung statues of the Five Great Knights, and one of the Pale King on the other side with a King's Idol on it.

When all three Dreamers have been defeated, the Dung Defender can be found asleep in his cave. Striking him in his sleep with the Dream Nail sends the Knight inside his dreams. There they may challenge the White Defender, a stronger version of the Dung Defender from the Kingdom's golden past. With each defeat of the White Defender, Ogrim comforts himself with his oath to Hallownest and the Pale King. 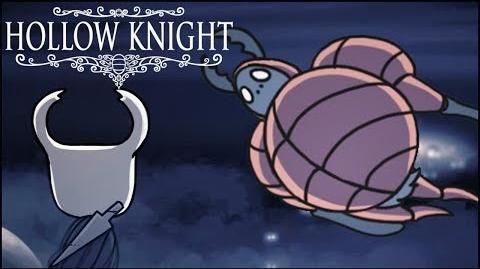 At the beginning of the fight, try to dodge the balls as best as possible. When he stops to conjure the two balls of dung, stand next to him, hit him once, step back when he throws the ball, step forward to hit him again and quickly step back when he throws the second one. This is the safest way to damage him with the Nail. His thrown dung balls cannot be destroyed by the Knight's Nail in one hit. However, they can be destroyed by any Spells.

Towards the end of the fight, he uses his attacks more frequently, particularly the Burst attack. Staying against the left side of the arena is almost completely safe as he always attempts to re-emerge from the ground close to the Knight. The balls bounce off of the wall, giving a safe spot to damage him.

During the Burst attack, if the Knight uses the Desolate Dive/Descending Dark Spell while he is burrowing, he is knocked out of the ground and stunned for a few seconds. This is especially useful during the Zeal Attack, where usually he does not perform it again. This is an opportune time to use a Nail Art or a Spell against him, as he goes right back to attacking as soon as he is hit.

Standing in a corner while he throws his dung balls typically provides lengthy opportunities to heal.

There is a glitch where if the Knight staggers Dung Defender at the moment he bursts from the ground, he falls beneath the arena. This is not a soft-lock, however, as he returns to the arena the next time he burrows into the ground for his Burst attack.

Dung Defender is located in the east part of the Royal Waterways.

Location in the Royal Waterways

Dung Defender in the arena after his fight

Dung Defender sleeping in his cave

Dung Defender woken up after five defeats of White Defender

Arena in the Royal Waterways 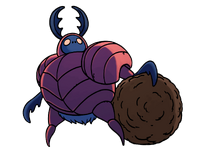