Crystal Peak is a huge glittering mountain located east of Dirtmouth.[1][2] Mines were carved into the peak to obtain the area's precious crystals.[3]

Crystal Peak contains extensive tunnels throughout the mountain which were used to mine its crystals. The crystals are present across the entire area, with some tunnels having crystals lining the top and bottom of the cavern. Conveyor belts can be found in many rooms which transport the crystal shards.

In the centre of Crystal Peak is a Bench with the Crystal Guardian boss. Its second form, Enraged Guardian, is located above this room, which can only be accessed once the Monarch Wings are obtained. A Mask Shard can be found after this boss fight.

A lift in the northwest part of Crystal Peak connects the area to Dirtmouth. On the summit of the mountain stands a statue of the Radiance which holds a Pale Ore. In the east part of the area are tunnels filled with old mining golems, one of which contains the Crystal Heart Ability.

Further below this room is a Snail Shaman temple where the Descending Dark Spell can be obtained. A nearby chasm leads to the Resting Grounds.

In Hallownest's prime, Crystal Peak's mines supplied the kingdom's cities with a constant supply of crystals.[4] The crystal ore contains energy, not as powerful as Soul but less lethal.[5] Besides regular bug miners who mined the crystals with their claw-picks, creatures such as the Shardmites and Glimbacks were used to carry around carts and machines.[6][7][8]

When the Infection took hold, many of the miners died and were subsequently reanimated.[9] Their husks were imprinted with strong purpose, causing them to continue mining even after death.[10]

The crystals themselves have a strange power hidden within them. They glow in the darkness, and there is a bright point of searing heat inside each of them. The crystals can refract light and also emit a very soft singing sound.[11][12][13]

Crystal Peak can be accessed from two rooms in the very east part of the Forgotten Crossroads. One room has a toll gate leading to Crystal Peak which can be opened for

50, but it requires the Lumafly Lantern to be able to interact with it. The other access point to Crystal Peak contains a breakable floor which can be destroyed with Desolate Dive/Descending Dark.

The very summit of the mountain, Hallownest's Crown is covered with mysterious glyphs which emit a radiant light.[14] The glyphs are written in an unknown language, with some of them depicting winged creatures.[14]

A statue of the Radiance stands at the precipice, looming over the town of Dirtmouth.[14] It contains a rare Pale Ore.

Hallownest's Crown is accessible by either using Monarch Wings or bouncing off enemy projectiles.

Crystallised Mound is an ancient abandoned temple found deep within Crystal Peak which is older than the mines surrounding it.[12] It was home of the Snail Shaman's fourth aunt who became encased in crystal after meditating too long within.[15][12] Breaking the crystal she is trapped in grants the Descending Dark Spell.

Entering this area requires Desolate Dive to break the floor. The Lumafly Lantern is recommended for the dark area right before the Mound. The Crystal Heart or the Monarch Wings is also required to cross the chasm leading to it.

Bottom room of the peak

Area that connects to Dirtmouth

Room that overlooks Dirtmouth where Quirrel can be encountered

Third mining golem where Crystal Heart can be found

One of the vertical passages

Large room in the north-eastern end

The glowing stones at Hallownest's Crown 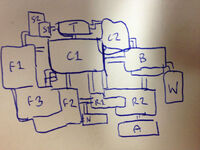