The Crystal Guardian is an optional boss in Hollow Knight. The Enraged Guardian is its second, stronger and faster form. Both forms have to be beaten to unlock its Journal entry.

The Crystal Guardian is part of the miners of Crystal Peak who died from the Infection and were reanimated by it.[1] It appears larger than the other husks, has crystal growing on its back and encasing both its arms and its head. It also has more mastery over the crystal's light than the Crystallised Husks.[2]

While encased in crystal, the Guardian shrieks similarly to the Radiance although at a higher pitch. When cleared of the crystal, it has a normal bug voice. Like the other miner husks, it is obsessed with the light but has grown too tired to mine it relentlessly as they do.[3]

The Guardian is first found on a Bench outside shacks in the middle of the Crystal Peak. It appears dead but prevents the Knight from resting. Striking it wakes it up and starts the fight. If the Knight is defeated and returns, the Guardian has regained its place on the Bench. Upon defeat, the Guardian's crystal growths shatter. Still animated by the Infection, it stands up and escapes by jumping through the ceiling.

The Guardian can be followed to the room above its abandoned resting place using the Monarch Wings. There, it has regained its crystal growths, but its first defeat has made it mad with anger, triggering its second form, the Enraged Guardian. Defeating it a second time breaks its crystal armour again and kills it. This also gives access to a Mask Shard, found within a large crystal deposit.

The Crystal Guardian has three manoeuvres: 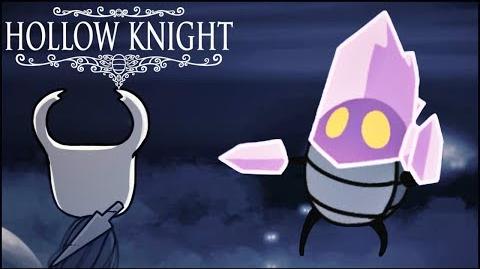 Weaversong Charm equipped or by repeatedly using the Vengeful Spirit/Shade Soul Spell, though the second method requires using the Dream Nail on the Crystal Guardian in order to regain SOUL without leaving the room.

The Desolate Dive/Descending Dark and Vengeful Spirit/Shade Soul Spells are useful. The Howling Wraiths/Abyss Shriek Spell is less useful because the Crystal Guardian is rarely above the Knight. One strategy is to slash at the Guardian with the Nail a few times in between Laser Beam attacks. Another strategy, which is not mutually exclusive to the previous one, is to, during a Laser Beam Attack, jump and dash over the Crystal Guardian to avoid its attack and safely strike it.

The Crystal Guardian can be encountered for the first time in the Bench room in the centre of Crystal Peak.

Crystal Guardian before the fight

Crystal Guardian escaping after the fight