Cloth is a wanderer in Hollow Knight. She is on a quest of her own throughout Hallownest to prove her bravery.

Cloth is a large cicada warrior.[1] She set out to Hallownest in order to prove her courage by defeating mighty creatures.[4] However, her cowardly nature often takes over her bravado and leads to hiding underground to escape her foes or to simply sleep, snoring loudly while doing so.[5] She is motivated by the prospect of dying in an epic battle and joining her departed Nola.[6][7]

Cloth fights by brandishing a club cut from the tooth of an ancient beast.[4] She jumps before landing her club, smashing her opponents to bits.

Cloth can first be encountered in the Fungal Wastes, above the entrance to the City of Tears. She is woken up by the sound of the Knight's footsteps and rises from the ground to talk to them. She tells them of the Mantis Tribe deeper down in the area, against whom she wants to test her strength.[8]

Later on, if Cloth has yet to be encountered in the Ancient Basin, she can be found at the beginning of the Failed Tramway in Deepnest. There she rests, exhausted and sore after her fight against the ferocious creatures of the Nest.[9] She plans to leave the area later and search for a less terrifying challenge.[10]

In the Ancient Basin, Cloth found herself unable to fend off the creatures infesting the end of the Tram tunnel and buried herself to hide from them.[11] Once the Knight clears off the tunnel of Aspid Hunters and Lesser Mawleks, she comes out from the ground. Abandoning her bravado, she openly confides her weaknesses.[11] Yet, inspired by the Knight's feats, she regains confidence and decides to continue her quest in Hallownest.[12]

From this point on, Cloth can be encountered at the entrance of the Queen's Gardens near the Fog Canyon. She returned to this area to face the Mantis Traitors occupying the gardens.[13] She hopes to finally be able to face down her fears this time or die doing so. She later appears to help the Knight during an ambush of Mantis Traitors near the White Lady's refuge, and they fight together against the Traitor Lord. However, the Traitor Lord mortally wounds her at the end of the fight, she then chooses to deal the final blow herself before dying.

Once the Knight leaves the area and returns, Cloth's spirit can be found above her corpse. She is thrilled by her fight, having achieved what she came to Hallownest for, and states she will depart soon to join Nola.[6] After leaving the area again, her spirit disappears.

If Cloth was not rescued in the Ancient Basin before killing the Traitor Lord, she decides to leave Hallownest, having found no challenge she could not overcome or die trying.[7] She returns to Dirtmouth and sleeps outside of Sly's shop for a quick rest. She thanks the Knight for the inspiration they gave her but states her plan to find more challenges outside Hallownest's ruins.[14] In her mind, she still hopes to be reunited with Nola in death.[7] Cloth leaves Dirtmouth after she is listened to and the area is exited.

Cloth can be found in several locations across Hallownest. If she is encountered in the Queen's Gardens, she cannot be found in Dirtmouth and vice versa.

Cloth in the Fungal Wastes

Cloth in the Ancient Basin

Cloth in the Queen's Gardens 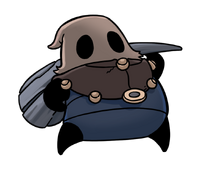 Retrieved from "https://hollowknight.fandom.com/wiki/Cloth?oldid=97595"
Community content is available under CC-BY-SA unless otherwise noted.