Outside - (Outside loop)
Inside + Outside - City of Tears OST

Inside + Action - City of Tears (Action)

The City of Tears is the capital city of Hallownest which is located in the centre of the kingdom. It is covered in perpetual rainfall that originates from the ceiling above.

The City of Tears is built in an enormous cavern below Blue Lake. It has numerous large towers with expansive windows which offer views of the city. Going up and down these towers can be achieved via small lifts.

The city has a notable divide between the rich and poor part. The eastern side of the city is where Hallownest's high society lived.[1][2] The interiors in this part of the City of Tears are more posh and luxurious and contain a red and purple colour pattern, while the west part's interiors appear to be more common and plain with more blue colour tones.

In the very centre of the city is Fountain Square, where the memorial fountain to the Hollow Knight is located. Hornet can be encountered here as well as Relic Seeker Lemm after one of the Dreamer has been defeated.

The Nailsmith's forge and Lemm's shop are located in the western side. This side also contains the City Storerooms Stag Station and the sub-area Soul Sanctum. Both Quirrel and Zote can be found in this part of the city under certain conditions.

The eastern side of the city has most of the sub-areas including Watcher's Spire, and the Tower of Love. The bosses Watcher Knights, the Collector, and Soul Master can be fought in these sub-areas. In one of the towers is the Pleasure House which has the only Hot Spring of the city. Lastly the Stag Station King's Station can be found in the very eastern part of the city.

In the past, the City of Tears was known as "the city at this kingdom's heart",[3] "Hallownest's heart",[4] and "Hallownest's capital city".[5][6][7] One way of entering it was via the Pilgrim's Way, a road starting in the Forgotten Crossroads and going through Greenpath and the Fungal Wastes, ending at the great gate in the western part of the city.[3] Travellers were promised that if they reached the capital that all their wishes would be granted and that they could share in the city's glory.[3][4] Goods from all across Hallownest were transported to the capital, though not many were sent back.[8]

The members of Hallownest's high society were the ones who exerted the most influence.[9] Lurien the Watcher appears to have been one of the most influential figures of the city, watching over it with his telescope in Watcher's Spire.

When the Infection spread across Hallownest, the capital's gates were sealed to stop anyone from entering or leaving the city in an attempt to prevent the Infection from reaching the city.[10][2] However, this proved to be in vain as the entire city became infected. Water now leaks from Blue Lake through the cavern's ceiling, causing the rain and giving the capital its current name.[11]

The City of Tears can be first accessed from several other areas of Hallownest. The west main gate can be opened from the Fungal Wastes by using the City Crest on the statue of the Great Knight Hegemol. The east part of the city can be accessed from the Royal Waterways after using the Tram Pass to get to Ancient Basin.

The Tram can also be used to reach Kingdom's Edge, which has an access point to King's Station on its west side. Lastly, the city can be reached by going to the Resting Grounds and taking the lift there which leads to the east part of the City of Tears.

Soul Sanctum was a research institution lead by the Soul Master where scholars worked on expanding the mind and attaining a pure focus.[12][13] When the infection spread, they sought to combat it by harnessing the power of Soul, the lifeforce which animates bugs' bodies.[12][14] They obtained this Soul by gathering Soul Totems and by killing countless bugs, whose bodies were left at the bottom of the Sanctum.[15] Unfortunately, their efforts were for nothing as all scholars ended up becoming infected.

The Soul Sanctum contains powerful enemies such as Soul Twisters which teleport around and cast spells. It is also littered with Follies and Mistakes, scholars whose bodies were twisted by their experiments with Soul. There are two Soul Warriors in the Sanctum, one of which is near the Shade Soul upgrade to Vengeful Spirit.

The Soul Master is a boss in the area who guards the spell Desolate Dive which is required to access many areas. The Spell Twister charm can also be found in the Sanctum in the northeastern part near Soul Master's arena.

The Pleasure House is an area in the City of Tears that can be opened with a Simple Key. It contains the City's only Hot Spring and used to be the location of the theatre where Songstress Marissa performed for audiences.[16] Her ghost can still be found on the stage.

The entrance is located here. When taking the lift, there are 5 floors that it will not stop at. Near the Hot Spring, there is a Bench, where Millibelle is found later after she ran away with the deposited Geo. There is a breakable wall beside the resting bench that allows access from the lift to the Resting Grounds.

Home of Lurien the Watcher, one of the Dreamers sealing the Black Egg and the Hollow Knight inside. At his side, his butler can be found. Lurien must be killed to complete the game, but reaching him is no simple task as the way is barred by his elite guards, the Watcher Knights.

Watcher's Spire can be accessed by using the Monarch Wings or down slashing with the Nail on a background object near the entrance.

The abode of the Collector, a being of Void who loves capturing creatures in glass jars. Accessible from Kingdom's Edge using the Love Key (acquired from a corpse in the Queen's Gardens). After flipping a switch, it can be exited into King's Station. Defeating the Collector allows the Knight to rescue 3 Grubs and acquire the Collector's Map, which marks the location of un-rescued Grubs on the map.

A Stag Station that lies partially in ruins, named after the King of Hallownest. A flooded Stagway beneath the working station infested with Belflies provides access to Kingdom's Edge.

The City Storerooms are where all goods were transported into the city.[8] They consist of two superposed caverns bordering the Fungal Wastes, above the city's entrance from the Pilgrim's Way. Cargo lifts transported goods from the Stag Station above to the storerooms below. This area also connects to the building below the Soul Sanctum and the lift to the Forgotten Crossroads. 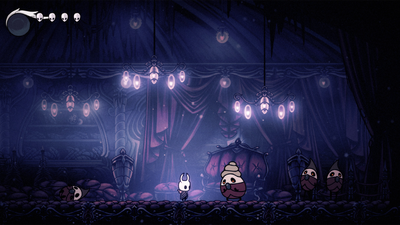 Lower western area of the City

Challenge room before a bench

Bridge connecting to the City Storerooms

Entrance to the Royal Waterways

Lower eastern area of the City

Hidden room with the Gorgeous Husk

Area where Shade Soul is acquired from a Snail Shaman

Desk area where the Collector's map can be found

Retrieved from "https://hollowknight.fandom.com/wiki/City_of_Tears?oldid=80300"
Community content is available under CC-BY-SA unless otherwise noted.