For the in-game mechanic of "Lifeblood", see: Lifeblood Cocoon 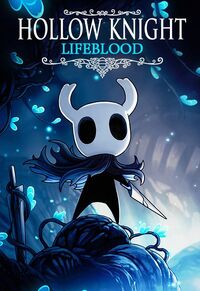 Lifeblood is the third free content pack to Hollow Knight, following The Grimm Troupe on 26 October, 2017. It was officially released on 20 April, 2018, after a period in public beta. Lifeblood was originally arranged to be just a major update, but in all later instances and mentions it has been referred to as a content pack. It is followed by Godmaster released on the 23rd of August, 2018.

As it was not one of the three originally planned content packs, it did not release with a teaser. Lifeblood focused mainly on enhancing technical aspects of the game, bringing upgrades and optimizations of various kinds.

Two more with the

Godmaster update:
And one last one with Voidheart Edition: