The Brooding Mawlek is a hidden boss in Hollow Knight as well as a Colosseum of Fools mini-boss.

One lone Brooding Mawlek can be found off-road in the Forgotten Crossroads, far from its living brethren in the Ancient Basin. It sits amidst fossilised remains of its kind and calls for them to breed.[1] This wild beast was driven mad both by its loneliness and the Infection which started covering its body with bulbs.[2] It attacks the Knight as soon as they enter its room by jumping from the background. Upon defeat, the Infection bursts out of the Mawlek, making it explode.

Another one can be fought alone during one of the waves of the Trial of the Fool at the Colosseum. This Mawlek presents the same Infected state.

At the beginning of its fight in the Pantheon of Hallownest, Tiso appears instead as if entering a Trial. He is then crushed by the Brooding Mawlek falling, which then engages the fight against the Knight. 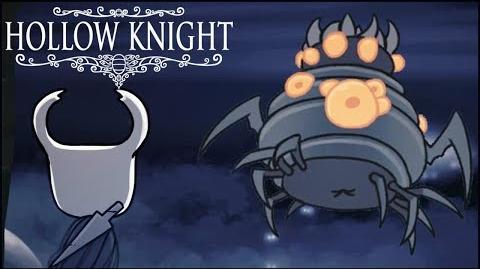 Without the Longnail and Mark of Pride reach enhancing Charms, the Brooding Mawlek may retaliate when hit. A solid strategy is to hit it a few times and move away quickly when it raises its claw. It is also possible to jump over and Nail-bounce on it to get to the other side.

When the Brooding Mawlek uses the Vomit attack, it is possible to safely dash over them with the Mothwing Cloak before the acid comes down. There are also some small safe spots in between the projectiles. It is also possible to Nail-bounce over to the other side.

If the Knight has the Sharp Shadow Charm, it can be used to dash through the Brooding Mawlek and deal damage.

Mark of Pride and Longnail make it easier to damage Brooding Mawlek when it performs the Slash attack while avoiding damage.

Another Brooding Mawlek is fought as part of the Trial of the Fool in the Colosseum of Fools in a very tight area where dodging its attacks is much more difficult.

The Brooding Mawlek in the Forgotten Crossroads is found beyond a wall jump section in a blocked room to the left of the vertical shaft filled with Gruzzers and Tiktiks.

It is possible to reach by Nail-bouncing on the spikes, although it is recommended to have obtained the Mantis Claw instead.

Another Brooding Mawlek can be fought in the Colosseum of Fools as part of the Trial of the Fool.

Brooding Mawlek in the Colosseum of Fools

Arena in the Forgotten Crossroads 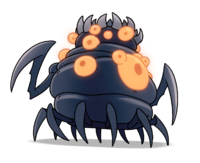 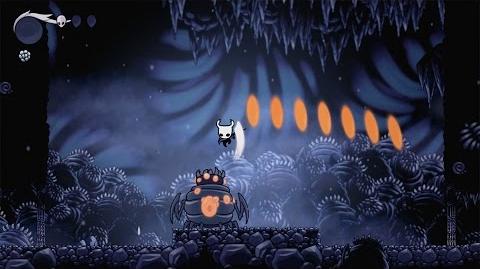