Broken Vessel is one of the main bosses in Hollow Knight. It blocks the way to the Monarch Wings. Lost Kin is its dream variant.

Broken Vessel is one of the many Vessels who escaped the Abyss like the Knight, but unlike the Knight, was met with a tragic death while still in Hallownest. Its corpse was forgotten in a windy cave deep within the Ancient Basin before the Monarch Wings where the Infection has spread.

Broken Vessel is found in a room of the Ancient Basin that is overgrown with Infection bulbs. When approached, Lightseeds rush to fill its broken shell, forming a large protruding bulb. The Infection reanimates the husk and causes it to attack the Knight. Like other Vessels, it has no voice, but the Infection within screams like the Radiance. Upon defeat, Broken Vessel's husk is cleared from the Infection, and it reaches out to the Knight before finally collapsing.

In addition to having a similar appearance to the Knight, Broken Vessel also shares similar moves: 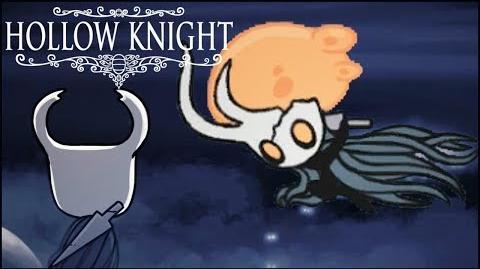 Broken Vessel is one of the few bosses that takes knock-back, because of this, the Vengeful Spirit/Shade Soul Spell can be useful, as it has a decent chance of hitting twice. Increasing the spirit's size with Shaman Stone increases the chance of a double hit.

Nail Arts can be useful in this fight, especially Cyclone Slash as it can be used to corner Broken Vessel and stagger it quite easily if used after an attack, especially at the start of the Cascade attack.

Broken Vessel can be found near the far west corner of the Ancient Basin, guarding the Monarch Wings Ability.

Broken Vessel reaching out after defeat 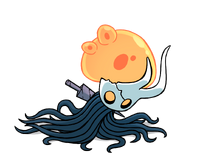 Broken Vessel reaching out to the Knight