Bretta is a Quest NPC in Hollow Knight. She is initially found in the Fungal Wastes where she can be rescued.

Bretta is a beetle[2] who is looking for a saviour. She has a massive crush on the Knight after she is rescued.[3] Bretta blushes if the Knight sits next to her for a while. She has several drawings and dolls of the Knight in her house, along with a diary where she writes about her "saviour".

If Zote is saved and defeated in the Colosseum of Fools, Zote shows up in Dirtmouth and Bretta falls in love with him.[4] One single painting of Zote replaces the dolls and drawings of the Knight that she had in her house.

Eventually, Bretta leaves Hallownest, regarding the Knight as merely a beast, and Zote as being diminished.[5] She realizes that she will not meet her life's companion if she sits idle.[5]

Bretta can be found in the Fungal Wastes, sitting alone in the dark, muttering to herself. After listening to her, she heads back to Dirtmouth, unlocking her house and a Mask Shard. Once there, she sleeps in her house and occasionally sits on the Bench.

If both Zote and Bretta are in Dirtmouth after Zote has been defeated in the Colosseum of Fools, a new room opens up in her house leading to a statue of Zote. When this statue is Dream Nailed, it transfers the Knight to a dream where they can fight Grey Prince Zote.

Once Grey Prince Zote has been defeated 4 times or more, Bretta leaves over the Howling Cliffs and is not seen again.[6]

Bretta can initially be found in the Fungal Wastes near the southeast part of Mantis Village, past the statue of the Dash Master. She can be reached by continuing west and subsequently completing a minor platforming challenge.

Location in the Fungal Wastes

Bretta lost in the Fungal Wastes

Bretta on the bench in Dirtmouth

Bretta sleeping in her house

Bretta and Zote in Dirtmouth

Bretta's house after being rescued 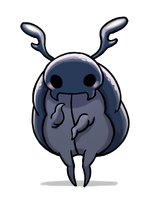 Bretta with orange eyes before the Lifeblood update